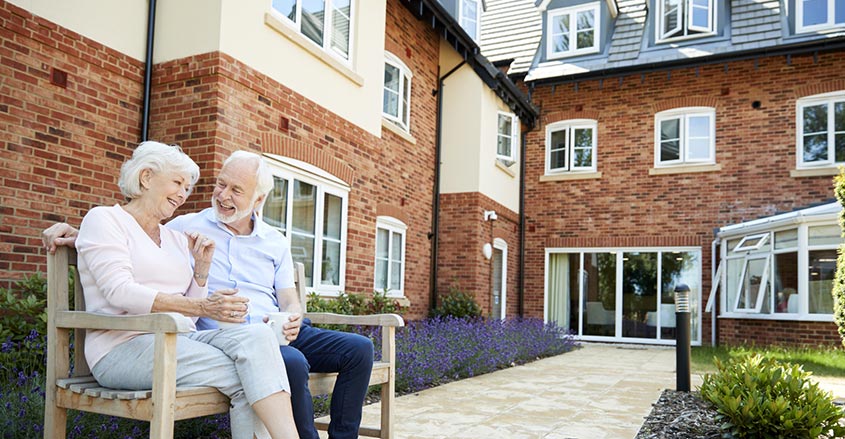 One of the hardest decisions that a retiree will have to make is determining where to live during retirement.

Mental and physical vitality depreciates incrementally with age. It can also be emotionally and physically prohibitive for some retirees to live on their own as they age.

Financial independence is an issue as well. According to a research study conducted by AARP, more than 47% of senior citizens do not believe that they can satisfy their monthly financial expenses for the next decade.

Along with downsizing, or renting an apartment, a lot of seniors opt to live in retirement communities.

Retirees can live on their own in apartment units or houses. Besides certain available amenities like dining facilities, medical units, and recreational activities, retirement communities are just places where retirees can live independently, on their own terms, and surrounded by their peers.

However, just like when buying a home or renting an apartment, its important to know just exactly you are getting yourself into.

Standard of living expenses still have to be met in a retirement community, such as monthly rent, dues, fees, and community-related expenses.

Also, the viability of your post-retirement budget ultimately determines how you will live a retirement community. Or interact with retiree peers, especially those of a higher financial status.

What to look for in a retirement community

It is important to consider what a retirement community can offer you if you choose to reside in one. Contrary to popular held notions, retirement can often be an anxiety inducing, stressful, and even depressing experience.

Retirees can go abruptly from working full-time for decades to having a lot of free time. An occupation is an identity, so something can feel lost in the transition.

Also, being retired doesn’t necessarily mean earning the right to idly sit around all day or intensely focus on hobbies. Its important to stay active and socially engaged throughout retirement.

So, if you are considering moving into a retirement community, or researching such for someone you know, you should make of list of the amenities, activities, and incentives you want from a community.

You can look for retirement communities that have on-site catering, cafeterias, or food services added into residency expenses. Consider what kind of exercise and wellness activities are available.

Look into what kind of entertainment, cultural, social, and greater community activities are available.

Consider what kinds of on-site amenities and services will be available, such as  housekeeping services, classes on various subjects, music appreciation, laundry, gardening, and so on.

Are pets allowed or are there convenient transportation services? Unlike an assisted living community, which has on-site medical and nursing staff to help infirm retirees, a retirement community may not necessarily have such services on-site.

Your best option may be to visit the retirement community that you are considering and check out firsthand what it has to offer.

Just like any residential community, a retirement community has recurring standard of living costs. If you take the time to visit one, make sure that you get a detailed list of all costs to live in one.

The reality is that many retirees don’t have any money or are not financially prepared for retirement.

More than 54% of American workers have absolutely no idea how much money they will require for retirement.

The average retiree requires income sources amounting to at least $40,000 a year to satisfy retirement expenses. Meanwhile, the average salary income for semi-retired and working retirees between the ages of 65 and 74 is just under $19,000.

Your ability to afford your retirement community standard of living costs depend on your budget and viable sources of income.

According to the American Seniors Housing Association, most retirement communities have a monthly rent range of between $1,500 and $6,000 a month.

This estimate is not all-inclusive. Additional services fees, costs, and retirement community dues could cost another $1,000 to $5,000 extra per month.

Social divides and where to live during retirement

One important reason why it is important to visit a prospective retirement community is to see whether a desired lifestyle can be maintained throughout residency.

Oakmont Village is a retirement community situated in Santa Rosa, California. It was established in 1963 to serve middle class retirees but had come to serve more affluent retirees in recent years.

Oakmont has 5,000 resident and more than 3,2000 residences. The average home is worth between $350,000 to $1 million dollars. Monthly dues at Oakmont Village amount to about $600 and are subject to increase.

The village become socially divided between wealthy retirees who were used to affluent lifestyles and working-class retirees who lived on fixed incomes.

The working-class retirees were worried that such a project would dramatically increase their monthly service fees and dues, expenses that they were already struggling with.

The warring pickle ball factions engaged in debates, yelling matches, and petitions. Extra security guards had to be hired to keep people separated.

Just as the new pickle ball court was about to be constructed, successfully lobbying by the working-class retirees halted the project. That didn’t end the hostilities. Neighbors turned on neighbors. Residents called the police on each other.

The problems came to a crescendo when 61-year-old Ken Heyman, the acting president of the Oakmont Village homeowner’s association, found the decapitated head of a rat in a bag placed on his front porch.

The action was viewed as revenge for deciding against the pickle ball court facility addition. Heyman resigned soon after and left Oakmont.

Al Medeiros, a 71-year-old Oakmont retiree and member of the Oakmont Homeowners’ Board was in favor of the project.

“One side felt that we’re an active-adult community and it’s our responsibility to provide activities and facilities to the membership. The other side seemed to think that well, we’re poor, so we really need to make sure our dues don’t go up and we should just provide the minimum,” said Medeiros.

As the pickle ball war at Oakmont demonstrate, the retirement community that you decide to live in may be the last place that you live in the rest of your life.

It is not a decision to be made lightly. Your quality of life will be determined by your budget, ability to find purpose in life, and how you interact with your peers.