The increase in volatility since the end of January has caused some concerns for investors. It has also presented some buying opportunities as well.

The main reason for the volatility is the ongoing trade negotiations and the possible trade war. The threat of tariffs from the U.S. and retaliatory tariffs from other countries has taken a toll on certain industries.

The sector that has lagged the market the most since the top in January has been the consumer staples sector.

The sector includes a lot of stocks that have a great deal of overseas revenues and investors are worried that tariffs from other countries could have an adverse effect on their sales.

One company that has dipped a little but has been able to remain above its 52-week moving average is McCormick & Co.

The company manufactures, markets, and distributes condiments, seasoning mixes, and spices. The Maryland-based company has performed extremely well from a fundamental perspective as well as the technical picture.

McCormick’s sales grew by 19% in the most recent quarter while the earnings grew by 32%. The company sports a profit margin of 16% and an operating margin of 16.8%. The return on equity stands at 26.1%.

With numbers like that, you would think investors and analysts would be more bullish toward the stock, but it’s quite the opposite.

In addition, the short interest ratio stands at 9.17. That means that the number of shares sold short is nine times the average daily trading volume.

If the stock continues to rise, the short sellers will have to cover their positions and that will add buying pressure. 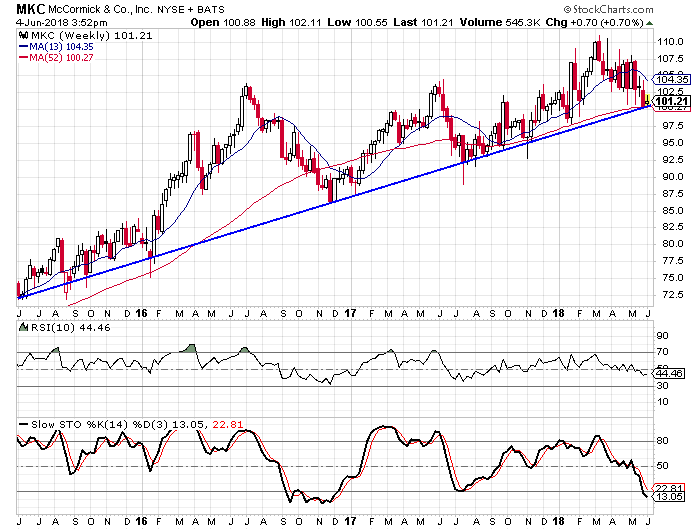 You can see on the chart how the stock has been trending higher over the last three years and a trendline has formed that connects the weekly closing lows.

The recent choppiness has caused the weekly stochastic readings have dropped down in the oversold territory. The last time the stock was this oversold was in late 2016.

In my experience when you find a stock with great fundamental readings, is in an uptrend, and has bearish sentiment toward it, you are looking at a great investment opportunity.

I look for McCormick & Co. to continue rising and the rally could accelerate when the negative sentiment starts to unwind. On top of all that, the stock pays over $2.00 a year in dividends for a yield of almost 2.0%.