Typically, consumer staples stocks are seen as a defensive sector, something to own when stocks are challenged.

Companies in this sector tend to have boring business models, selling things like cleaning supplies, soap, or toothpaste. Basically, stuff where there will be demand regardless of economic conditions.

Since the bull market began in 2009, these stocks have been fantastic performers. A major tailwind has been falling interest rates which make these stocks’ dividends more attractive.

Essentially, the economy was in a sweet spot for these companies, where the economy was good enough to ensure that revenues were growing, but not so good that the Federal Reserve would be forced to raise interest rates.

The trade in consumer staples has become bubble-like in some ways as investors threw traditional valuation measures out the window. Many investors started to treat the sector as a proxy for bonds.

In a falling-rate environment, this rationale makes sense. However, the result was that these stocks have become overvalued by traditional metrics. 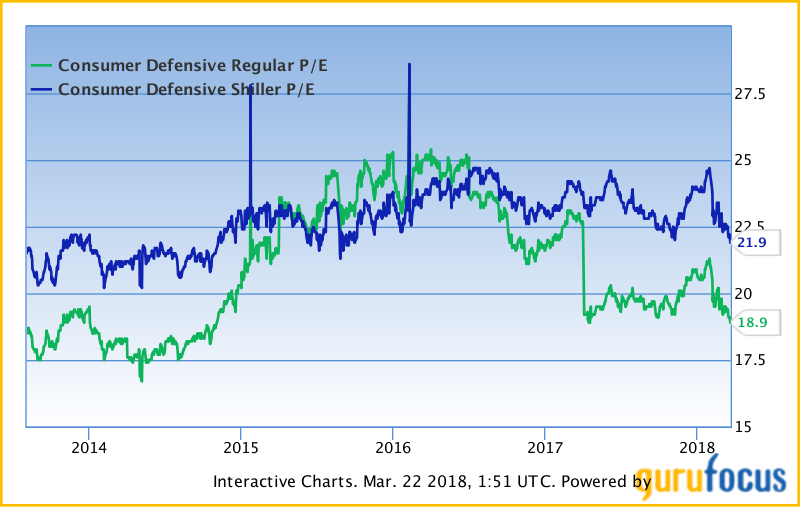 For a boring sector with minimal revenue growth and low margins, this is a remarkable overvaluation, with historical averages in the 12 to 15 range.

Of course, overvaluation can persist until there is a catalyst for prices to return to reality.

In this case, the immediate catalyst has been rising interest rates, which have more than doubled since mid 2016.

Already this is beginning to affect the sector, which is down 11% from its highs in late January.

Interestingly, while the S&P 500 is down 5.5% from its late January highs, consumer staples are down significantly more and below its February lows. The S&P 500 is 7% above these levels.

Another threat to this sector is Amazon. The retail giant has created its own line of products to win market share.

For a long time, companies essentially paid stores a premium to ensure that their products were given premium placement.

In a world where more and more people shop online, however, store placement is less meaningful.

Plus, Amazon is willing and able to sell items at a loss in order to take market share from these companies. For instance, consumer staples are perfect for the type of subscription services that Amazon now aggressively promotes.

In addition to Amazon, these companies face competition on the high end from organic and environmentally friendly brands.

On the low-end, they face competition from dollar stores, which stock their own brands. The net effect of this is lower revenues and lower margins.

Another factor to consider is these companies are not used to competition. They have been wildly successful due to customer loyalty, brand value and premium product placement.

Bear case in a nutshell

The bear case for this sector is simple: Prices are overvalued.

In addition, interest rates are rising which has scared off yield-hungry buyers, slowed share buybacks, and raised borrowing costs. Finally, margins are under steady attack from Amazon.