Stocks around the globe appear to be in the process of consolidating. Stocks of U.S., Japanese and Indian companies traded in a volatile sideways pattern while stocks of Chinese and Brazilian companies fell sharply over the past three months in response to financial market participants’ fears regarding the potential negative affect of recently imposed tariffs, as well as the threat of additional tariffs on the trading of goods between the United States, the Eurozone, Japan, China, Canada and Mexico.

I expect a continuation of the recent fear-mongering regarding tariffs to continue to negatively impact stock prices over the next few months. However, my research and experience suggests that positive economic developments will provide a floor of support for stocks and that stock prices in general will soon resume their May 4 to June 11 upturn.

In regard to significant economic developments in the United States, the U.S. Department of Commerce reported on July 3 that new orders for goods produced at U.S. factories (factory orders) rose during May, the latest month for which data are available, by the biggest percentage increase since June 2017, increasing by 9.2% compared to the same month a year ago.

There’s a good chance that factory orders continued to increase during June. The Institute of Supply Management (ISM) reported on July 2 that its latest survey of purchasing managers at U.S. manufacturing companies indicates that manufacturing activity in the United States accelerated last month after expanding during each of the prior 21 months. Meanwhile, companies that operate in 17 of the 18 industries interviewed by the Institute reported growth.

Additionally, the ISM reported that backlogs of orders for manufactured goods rose for the 17th consecutive month, while wholesaler and retailer inventories of such goods remained at “extremely low” levels, indicating that manufacturing activity in the United States will continue to expand at a fast pace over at least the next few months.

Separately, the U.S. Department of Commerce reported on July 2 that construction spending in the United States rose for the second consecutive month during May, the latest month for which data are available.

In addition, Autodata Corporation reported on July 3 that sales of automobiles in the United States rebounded during June after decreasing during each of the prior two months, increasing by 3.9% compared to the month of May.

Of utmost importance, recent surveys of U.S. households regarding their economic sentiment indicate that Americans remain optimistic about their personal financial situations, employment prospects and outlook for the direction of the U.S. economy for the next six months.

That’s a significant factor because Americans tend to increase their spending on various types of goods and services when they’re optimistic about the economy. Personal spending in the United States accounts for approximately 68% of the country’s total output of goods and services, or gross domestic product (GDP).

That optimism was demonstrated by the substantial increase in sales that occurred at U.S. retail stores over the few months, as is illustrated in the chart, as well as by last month’s sharp increase in U.S. auto sales.

Recent surveys of U.S. small business owners indicate that they also remain optimistic about the U.S. economy, with the National Federation of Independent Business (NFIB) reporting on June 12 that the economic optimism of small business owners rose during May, the latest month for which data are available, to the highest level since November 2004 and to the second-highest level since late 1973, when the NFIB began conducting such surveys.

According to the NFIB, owners of small U.S. businesses reported that positive earnings trends rose to the highest level on record and that positive sales trends rose to the highest level since 1995. Meanwhile, 30% of the small business owners that the NFIB surveyed stated that they plan to increase their spending on business equipment and operating facilities — on capital goods and projects — during the next few months.

That’s a positive development because pace of U.S. economic growth tends to accelerate, and U.S. stock prices in general tend to trend higher, when businesses increase their spending on capital assets, that is, when gross private domestic investments trend higher.

Also of great importance, the U.S. Department of Commerce reported on June 28 that the after-tax profits of U.S. corporations rose during the first quarter of this year by the biggest year-over-year percentage degree since the first quarter of 2012, increasing by 16.9% compared to the same period a year ago.

My daily tracking of earnings announcements by companies that trade on U.S. stock exchanges indicates that corporate profits continued to increase sharply during the quarter ended June 30. That’s an extremely significant and positive development because the level and direction of stock prices are determined ultimately by the level and direction of their underlying companies’ profits.

Lastly, recent developments in the U.S. employment market suggest that the Federal Reserve will maintain the target range for its overnight bank lending rate, the Federal Reserve rate, near its current level of between 1.75% and 2.00% for at least the next few months in response to U.S. employers creating a fewer number of private-sector jobs during the past four months than during the first two months of 2018.

In addition, numerous measures of inflation indicate that U.S. inflation rates will not rise to problematic levels during the coming months. Such a development would bode well for the near-term future direction of corporate profits and stock prices, as the present value of any given company’s future profits is affected by the level and direction of interest rates. 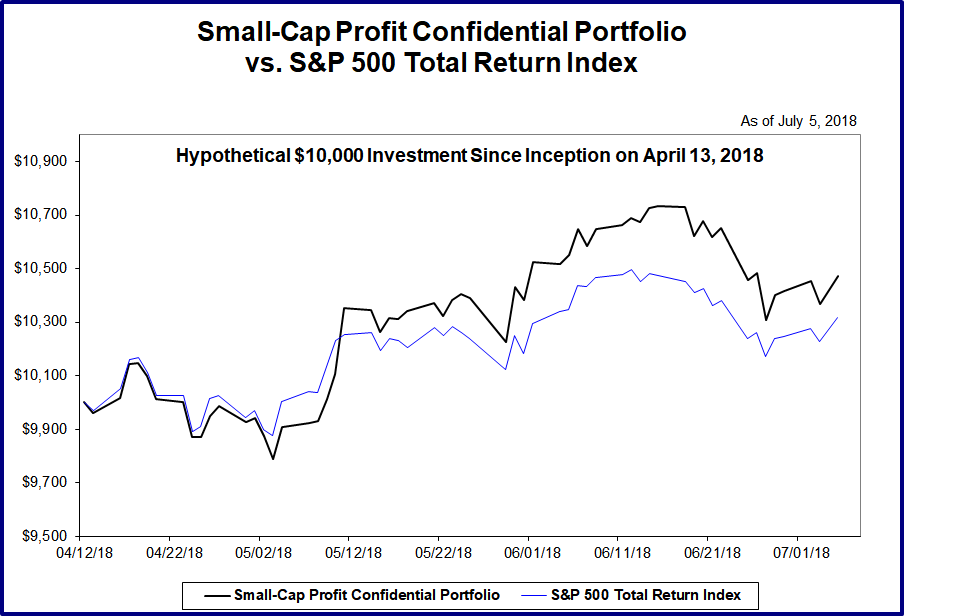 In addition to the positive economic developments mentioned above, the recent readings on economic indicators for the Eurozone and India suggest that their economies also will continue to expand at a healthy pace over at least the next few months.

In contrast, recent economic statistics for Japan and China have been mixed, giving no clear indication as to the future direction of their economies, while the latest economic indicators for Brazil suggest that the South American country is in the process of re-entering its worst economic recession ever, one which occurred from mid-2014 to September 2016.

My research indicates that the outlook for our current stock recommendations appears to continue to be favorable, with that research indicating that their respective underlying companies will continue to grow their revenues and earnings at a fast rate for at least the next couple of years.

YES, sign me up! David Frazier’s powerful small-company picks that deliver index-beating gains, direct to you!