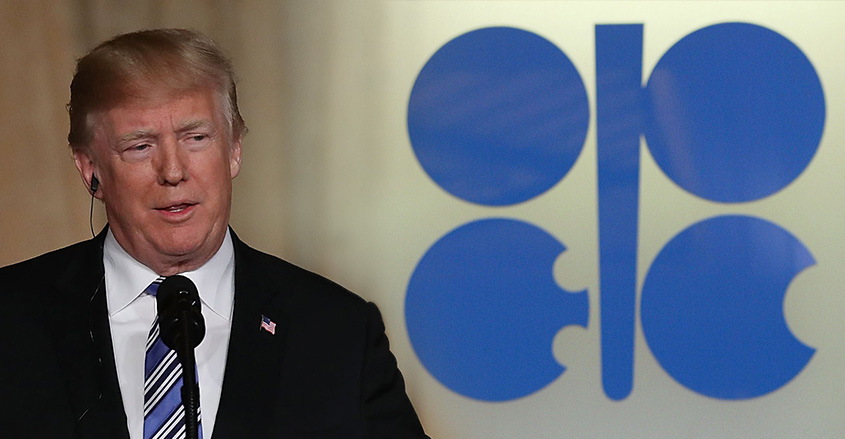 President Donald Trump fired off a tweet on this week taking oil cartel OPEC head on over rising energy prices.

U.S. gasoline prices are at $2.77 on average and well above $3 a gallon on the West Coast.

“Looks like OPEC is at it again. With record amounts of Oil all over the place, including the fully loaded ships at sea, Oil prices are artificially Very High! No good and will not be accepted!” Trump fumed.

This comes just weeks before Trump will need to make a decision on the Iran nuclear deal, the result of which could send oil prices even higher.

Trump will have to make a decision whether or not to extend the Iranian nuclear deal ahead of a May 12th deadline.

If the deal is declared over, then the United States likely would sanction oil that comes from Iran. U.S. allies, meanwhile, are vehemently against the U.S. exiting the Iranian nuclear deal.

The deal bans Iran’s nuclear program in exchange for the removal of strict sanctions that severely limits Iran’s ability to sell oil.

French President Emmanuel Macron is scheduled to visit the U.S. next week and is expected to encourage Trump to remain in the deal.

Looks like OPEC is at it again. With record amounts of Oil all over the place, including the fully loaded ships at sea, Oil prices are artificially Very High! No good and will not be accepted!

OPEC was nearly written off two years ago as oil prices dropped steeply. However, the cartel created an alliance with Russia and other non-OPEC producers that has kept it afloat.

Together, Russia and Saudi Arabia lead this partnership and have managed to keep a hefty amount of the supply from the market.

This in turn has brought an extensive global oil saturation into balance in 16 months, even as U.S. production has swelled to record levels.

Both Russia and Saudi Arabia would like to continue their partnership beyond the termination date of their production deal this year.

Meeting were ongoing in Saudi Arabia while Trump was tweeting. When asked about the tweet, Saudi Arabia Energy Minister Khalid Al-Falih said, “Markets should determine price.”

A news report this week suggested Saudi Arabia would not mind seeing prices in the $80 to $100 a barrel range, up from around $68 now.

However, experts say $100 is unlikely without a sudden loss of significant supply.

Oil observers already had predicted prices at the pump would top $3 a gallon for unleaded gasoline in many parts of the country in the next few weeks as summer driving season approaches.

“Right now we have nine states above $3. I think we might see about half of the states get to $3,” said Tom Kloza, global energy analyst at Oil Price Information Service.

“The region that will see the biggest increase soon is the northeast because we’re switching to summer gas.”

Andrew Lipow, president of Lipow Oil Associates, is quoted as saying, “There’s good demand here, and worldwide demand for oil is going up, we could hit $2.90 as a national average.”

The last time gasoline was at $2.80 per gallon was in the summer of 2015. It is entirely possible gasoline prices this year could surpass that to a four-year high this summer.