Bitcoin has remained relatively strong as compared to most other coins and in fact it has been the coin to run to when trouble hits, either in the cryptocurrency market or because people are running to Bitcoin in place of their fiat currency.

At the end of 2016, just before many of the altcoins started to take off (with ETH), BTC’s share of the total crypto market was about 88%.

BTC’s percentage of total market cap could drop lower again after the next bull market gets going but I think it will hold the crown of digital gold for a long time.

With Wall Street money expected to flood in by the end of the year and with many countries floundering in debt and experiencing hyperinflation we’ll see the world’s citizens getting more and more involved with Bitcoin.

As a side note, Venezuela followed Turkey’s footsteps in “fixing” their hyperinflation problem. While Turkey removed six zeroes from their lira in 2005 and printed new money, Venezuela removed “only” five zeroes and is printing new money.

That means five zeroes taken off money in people’s savings accounts. The value went instantly from 100,000 to 1. There’s a reason why people are moving into Bitcoin — to save their assets.

Even as Bitcoin’s price has suffered this year there continues to be a significant increase in mining operations.

It takes a heavy investment in the equipment to mine Bitcoin as it’s become, by design, more difficult to mine. Investments in new equipment and power sources have continued to drive down the cost of mining and efficient miners remain profitable even at this year’s lower BTC prices.

“Hashrate” is the term used for the computing power that is used to mine Bitcoin. Even as BTC prices dropped this year we see miners continuing to invest in new equipment in preparation for the next boom.

The hashrate has quadrupled this year for bitcoin, doubled for Ethereum and tripled for Litecoin.

The fact that miners are willing to make the investments to mine these coins is a positive sign for the future. We don’t need to worry about cryptocurrencies dying from a lack of mining interest.

The interest and the money is definitely there.

Many call Bitcoin “digital gold” and it’s interesting that Bitcoin is now outperforming gold in just about every way that gold is useful as money.

Transaction volume in Bitcoin has been higher than in gold since the second quarter of 2017. So far in 2018 BTC transactions have amounted to about $1,100 billion; gold is a distant second at about $400 billion.

There are many who believe Bitcoin can easily take at least 5% to 10% of gold’s market. Such a shift would increase Bitcoin’s market cap by at least 3x to 5x its current size.

When you add in the additional demand from those seeking shelter from failing fiat currencies and other investors (big money from Wall Street) wanting in on the next great investment, it’s not hard to see why 10x growth is going to be relatively easy to achieve in the next couple of years, maybe much sooner.

The strong price bounce for Bitcoin in July was largely retraced in August, but it’s still better than most other coins which made new lows in August.

From a price pattern perspective I’d like to see Bitcoin bounce back up, perhaps to about $7,000, and then make one more low to complete its downside pattern. 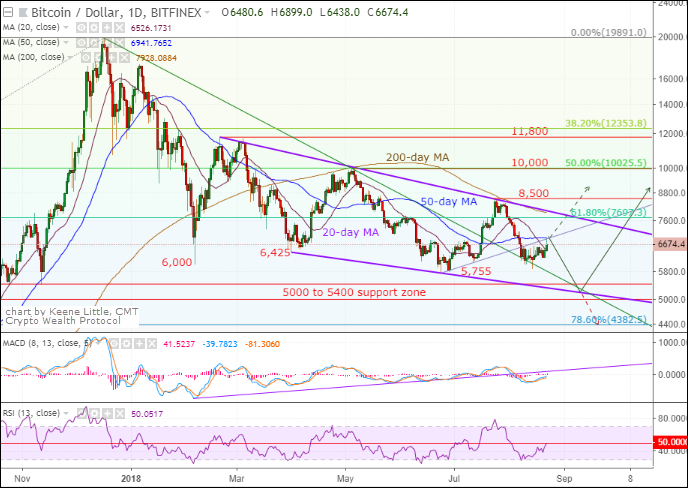 While I never wish for lower prices I think we’d have a healthier rally (the start of a new bull market) if it starts from the $5,000 to $5,400 support zone.

That support zone is like a price magnet and I feel like it’s the siren song that Bitcoin can’t avoid listening to.

The descending wedge pattern (bold purple lines) is an ending pattern that ideally needs a new low to complete. The bottom of the wedge is currently in the support zone and September would be an ideal month for BTC to complete its bear market.

It would provide a high-confidence setup for a buying opportunity.

For exactly pricing and more analysis, click here to get my Crypto Wealth Protocol newsletter delivered to your inbox!