In 2017, Boeing share prices rose 89%. The company’s stock came back down to Earth in 2018, especially after President Trump made public threats to cancel a $4 billion Boeing order of the next generation of Air Force One.

Still, some financial experts predicted that 2019 would be a banner year for Boeing stockholders.

That was then. The recent crashes of two 737 MAX aircraft has shaken the faith of the air traveling public and shareholders in the company. 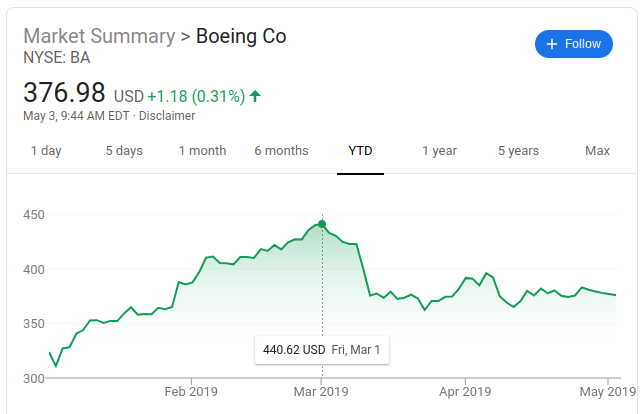 Dennis Muilenburg, the CEO and chairman of Boeing, used up a large part of the Q1 2019 shareholder’s conference call trying to bolster confidence in the company.

Muilenburg started off the call by asserting the company’s dedication to operational and public safety.

Boeing is weathering dogged public criticism that it prioritized profiting over safety. Muilenburg acknowledged the company’s current PR problems in relation to the 737 MAX.

“We know we have some work to do to earn and re-earn the trust of our customers and the flying public in particular.”

The crashes of Lion Air flight 610 into the Java Sea in Indonesia on October 29, 2018 and Ethiopian Airlines 302 shortly after takeoff near Addis Ababa on March 10, 2019 were connected via crash investigations later.

According to reports, Boeing failed to inform Southwest Airlines, its largest buyer of 737 MAX aircraft, and the U.S. Federal Aviation Administration, that the anti-stall technology in the 737 MAX was turned off.

Boeing only acknowledged the anti-stall technology issues after the burgeoning PR nightmare that snowballed after the crashes.

Shortly after the Ethiopian Airlines crash the 737 MAX fleet was grounded globally. Boeing is reportedly working on a software patch and revised a certifying program for pilots to address the issue.