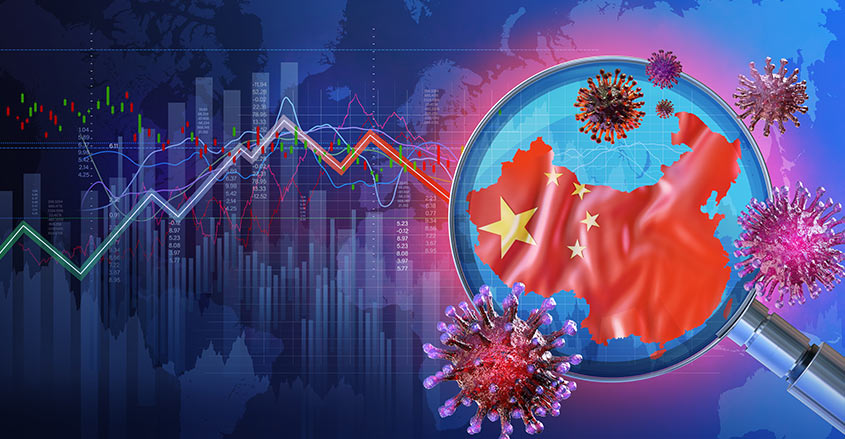 The coronavirus epidemic continues to wreak havoc on the Chinese economy, as the country’s businesses — both large and small — struggle to resume operations. Recent government indexes indicate that manufacturers and service sectors have been slow to recoup.

A review of the extraordinary measures taken by the government reveals the negative impact these initiatives have had on the Chinese economy.

One of the first steps taken by the government, was an immediate nation-wide clampdown on transportation and business activity. The transportation limits were substantive in their scope. Numerous venues were shut down, including restaurants and other public places. In some cases, travel bans were directed at entire regions. Health officials monitored movements and limited access to some neighborhoods.

As of February 29th, 31 of China’s provinces and municipalities continued to maintain health advisories that limited travel. Other large cities, including Beijing, Shanghai and the important manufacturing region of Zhejiang also remain on high alert.

In many cases, once it became known that the contagion was worse than initially reported, families voluntarily shut themselves inside their homes in a self-imposed quarantine. In Wuhan, a subway system that routinely carries 3.4 million people per day has been closed for weeks.

These strictly enforced travel bans imposed by the Chinese Communist government, which in some cases are monitored for compliance, have had a devastating impact on the manufacturing sector.

The manufacturing sector is particularly at risk because of its reliance on labor. Consider the following astonishing statistics: Approximately 290 million people in China work in locations other than their hometown, including 75 million whose jobs are in a different province.

It is clear that many of these people who returned home for the Lunar New Year holiday in late January remain home bound. Tracking people’s movement is one of the most informative method for estimating the scope of the virus on overall economic growth. Morgan Stanley estimates that less than 40% of the people who left the most populous Chinese cities for the Lunar New Year holiday have returned.

Since migrant labor constitutes approximately 40% of China’s work force the massive travel disruption will have a negative impact on overall production and assembly business activity. In order to appreciate the scope and magnitude the virus has had of the production process in China, imagine the impact on the U.S. economy some 30 years ago if the entire Midwest industrial belt was shut down, its operations curtailed, for two months.

The damage to the Chinese economy that the necessary preventative procedures has inflicted is staggering in its short-term severity. The effects of the virus have spared no region and has been felt across many industrial and service sectors. It is not difficult to imagine the pain a complete travel ban and shortage of labor would inflict on China’s economic growth in the short term.

Some economic indexes published by the government indicate how detrimental the virus has been, even though the initial outbreak was little more than 60 days ago.

In February, an official Chinese government economic indicator that tracks sentiment among purchasing managers at large industrial enterprises dropped to its lowest level ever recorded. The precipitous drop in this important measure clearly indicates an economic contraction is on the horizon.

But the bad news doesn’t end there. The government’s National Bureau of Statistics noted that the index, used for the past 15-years, plummeted to 35.7 from 50.0 in January — a decrease even below the depressed level recorded during the global financial crisis in 2008.

A related index that tracks purchasing plans for services industries, also plunged to a new historical low of 29.6 — far below the 50 mark that distinguishes an economic expansion from a contraction. The decline is notable as its indicates weakness in the construction, transportation, food service, hospitality and tourism sectors. These standard Chinese government measures of business vitality unmistakably indicate a country that is struggling to regain its economic momentum.

How severe is the damage? Because of the unprecedented decline in both purchasing measure indexes, the first quarter economic report disclosed by the Chinese government may reveal a contraction for the first time since the Cultural Revolution of the late 1960s.

The Chinese economy today is significantly more dependent upon stable consumer spending than it has been in the past. The extent of the epidemic’s impact on China’s economy depends on how long it lasts, but reopening factories is just part of the challenge.

According to Zhang Xiaobo, a researcher at Peking University and the Center for Global Development, “Even if the industrial production can be quickly resumed, it will take more time for the consumer service sector to recover.”

Other indicators suggest that, at present, any economic rebound remains very limited.

Surveys published by chambers of commerce that represent international businesses in China show executives bracing for a hit to their revenue due to the fallout from the virus.

The ability to rebound is particularly acute for small businesses, which are sensitive to revenue shortfalls because they now will have less money to pay employees, pay down debt and meet other obligations.

An additional factor, one that is indeterminate and unforeseeable yet consequential, is the extent to which foreign companies that fear a global economic slowdown from the virus will cancel or postpone orders from suppliers or manufacturers in China.

Foreign businesses may delay their plans indefinitely until they are assured that any long-term effects on their domestic as well as the global economy have been eliminated. That in turn will only make the pain worse for China as it tries to bounce back from coronavirus.