Oil prices jumped recently and this led to a lot of analysts raising their forecasts for oil prices.

I have seen a number of headlines in recent weeks with the most common prediction being $100 a barrel. At least that was the case until last week.

Oil prices had really been climbing for the better part of the last year and the rise caused a trend channel to form on the chart for West Texas Crude.

The price moved above the $70 mark for the first time since November 2014. 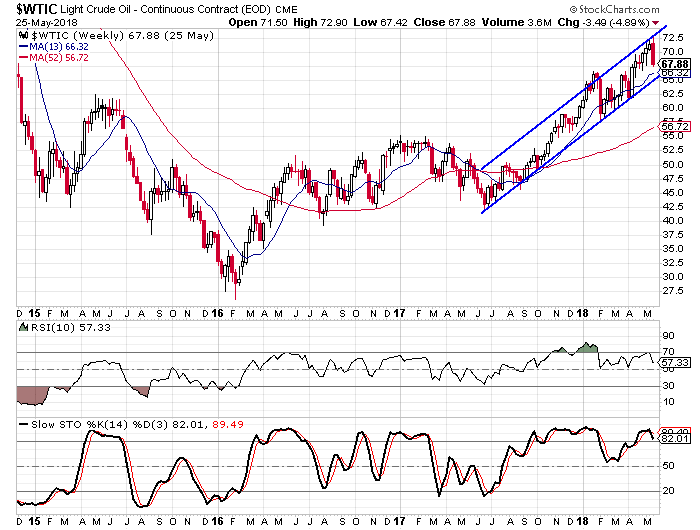 A number of factors have helped push oil prices higher — an output drop in Venezuela, the everlasting tensions in the Middle East, and an increase in demand.

When prices increase, oil-producing countries want to take advantage and boost production while the price is up. But it is also in their best interest to have a stable market.

Last week prices surged to $72.90 a barrel, but a decline ensued on Friday following hints of a boost in production.

That is the tricky part about commodities like oil. The price jumps up, the supply gets bumped up and that moves the price back down. The announcement from last week came from Saudi energy minister Khalid Al-Falih at a panel in St. Petersburg, Russia.

The energy minister commented that the kingdom was in discussions with Russia and other OPEC countries to boost oil production in order to ease supply concerns.

The statements caused oil prices to drop sharply on Friday and by midday on Tuesday the price had dropped by more than 10% from the high to the low.

OPEC is scheduled to hold its next production meeting on June 22 in Vienna. That likely means the volatility will continue for the next three to four weeks.

Prices may bounce around a little for the next month, but knowing which direction they will go in is a tough call. The momentum is to the upside, but the fundamental supply and demand relationship could get disrupted at the OPEC meeting.

One way to play oil for the next move is with a straddle trade.

With a straddle you buy both the call options and the put options at the same strike price and for the same expiration date.

In the case of oil volatility, I like the idea of playing a straddle on the VanEck Vectors Oil Services ETF (NYSE: OIH). This ETF holds shares of the biggest oil services companies and has a high correlation to the movements in oil prices. 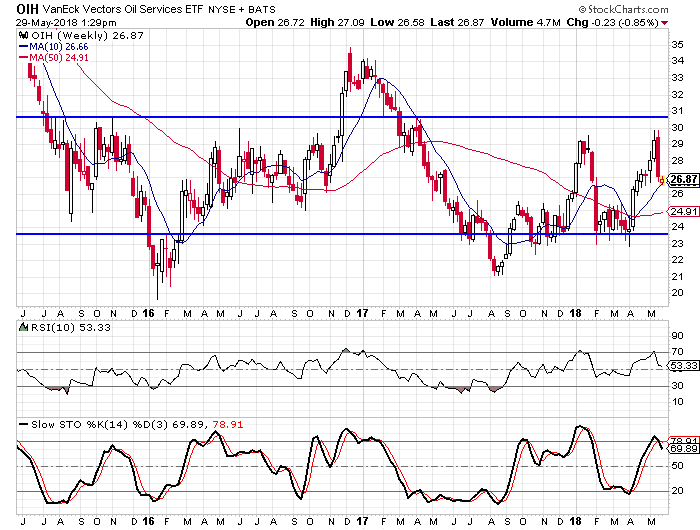 The gain will come from one side of the trade. It likely will mean that either the puts or the calls will expire worthless.

The one thing you must have for a straddle to work is a big price move. You don’t really care in which direction, but you do have to have a big move.

I usually use a target gain of 50% for a straddle trade, so that would mean the combined prices of the calls and puts would need to reach $3.59.

What this means is that the OIH needs to reach a low of at least $23.41 or a high of $30.59. That is what the two blue lines on the chart represent. Those are the targets.