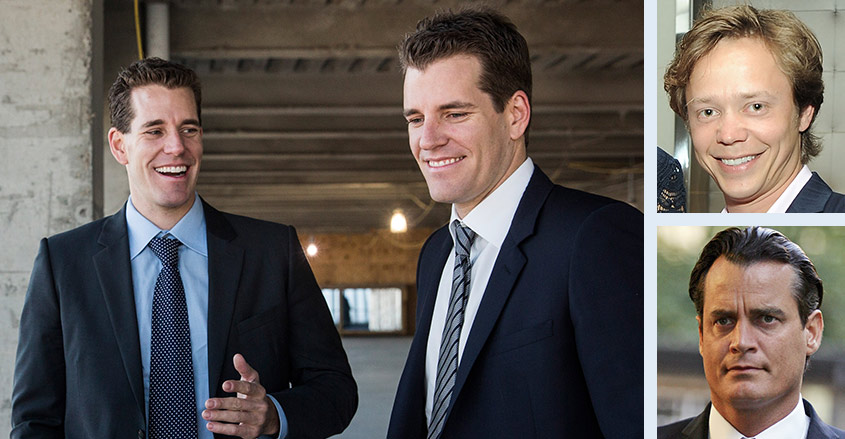 New markets create new, and sometimes very great, wealth. Centuries ago, it was spices. More recently speculators got rich on railroads, then stocks.

The virtual currency market was created less than a decade ago but already has minted multi-millionaires and even billionaires.

Forbes, the keeper of the lists of the world’s richest people, found 10 crypto billionaires.

Eventually, the twins were awarded $65 million in cash and Facebook stock.

“In April 2013, the Winklevoss twins together held $11 million in Bitcoin priced at $120 a coin,” CNBC calculates.

Given their stock wealth in Facebook, the twins say they are are long-term investors in the crypto market. They expect the market cap of cryptocurrencies to eventually reach trillions of dollars.

On the way to that level, however, investors should be prepared to accept volatility.

Larsen, for instance, has long been atop the list of crypto wealth. But he was once richer than Zuckerberg.

When the Ripple XRP coin reached its all-time high of $3.84 in January, Larsen’s 5.19 billion coins along with his ownership of the company offering the coins reached a value of almost $60 billion.

At the time, Zuckerberg was worth around $55 billion. But the Winklevoss twins may have the right idea.

“This is an opportunity to be a trillionaire, someone who is positively impacting a trillion living things on this planet,” Brock Pierce, chairman of the Bitcoin Foundation, recently said.

For now, the list of the richest includes only men, with an average age of 42.

But, of course, there is room in any potentially multi-trillion dollar market for women to join the ranks of the richest.