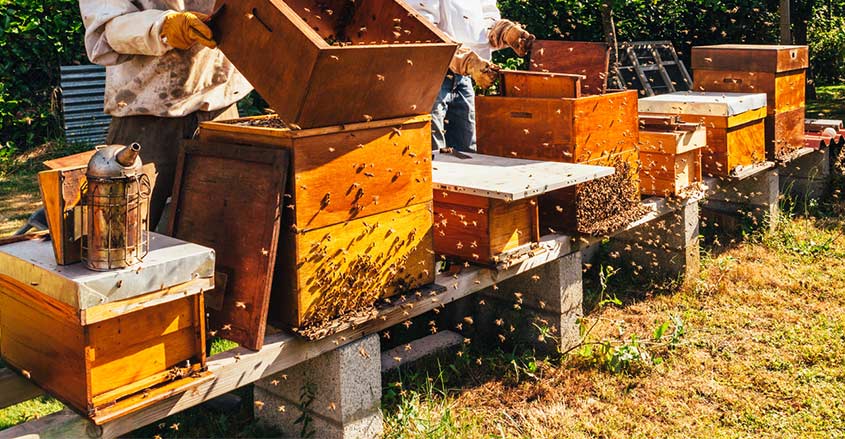 “Bee rustlers” sounds like a punchline, but renting hives on active farmland is big money to food growers around the world.

Consider the lucrative almond industry. More than 80% of the world’s supplies of almonds are grown in California.

Approximately 1.2 million acres of land is dedicated to almond tree pollination. There aren’t enough bees in California, so almond farmers rent apiaries from all over the country.

Beekeepers can charge hundreds of dollars per beehive for the entire almond season, which lasts several weeks.

Beehive theft is not a victimless crime, nor is it a humorous one. Professional beekeepers are losing fortunes and lifelong livelihoods to the annual thefts.

Lloyd Cunniff, a third-generation apiary business owner from Montana, can attest. In 2017, a month before almond season, he had 488 beehive boxes with over 50 million bees stolen from him.

The theft represented over $100,000 in potential pollination fees and the complete loss of Cunniff’s livelihood. “I was 57 years old, and I had to start over from scratch,” said Cunniff.

“Where I had been thinking about retiring, now I got to … there’s no way I can retire now.”

Butte County, California Detective “Rowdy” Jay Freeman, a beekeeper himself, says that beehive theft is “the perfect crime” because most people don’t know about it nor would suspect it.

Someone with basic beekeeping skills can pull it off in plain sight.

The scourge of beehive theft is only poised to get worse as bee populations fluctuate and almond exports expand.

According to the Bureau of Labor Statistics, global export demand for American almonds surged 380% between 2005 and 2015.

As demand increases for almonds, beekeepers can command higher apiary renting fees from almond farmers. Most California almond farmers pay anywhere between $200 to $500 to rent just one beehive.