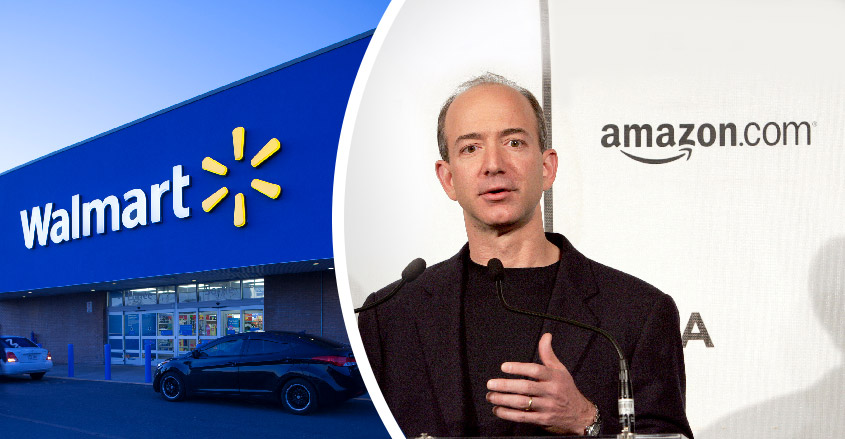 Jeff Bezos, the world’s richest man and founder of Amazon, continues to innovate and try to outsmart the competition.

In a note to investors he announced that 100 million people are paying members of Amazon Prime, the Internet retailer’s subscription membership.

That numbered grabbed headlines. What people missed is how Bezo plans to tackle his ultimate rival, the global discounter Walmart.

Amazon is trying hard now to increase subscribers in the United States, a tough nut to crack when it comes to the lower-income folks, the most obvious reason being that they have less disposable income.

An Amazon membership costs $99 a year and gets you free shipping on many items, ad-free music, TV and movies and free photo storage, among other benefits.

Wall Street analysts estimate that Amazon Prime reaches between 40% and 60% (and more) of all United States households. Impressive, but that means that Amazon has of room to grow.

So Amazon is going to be a discounter, too.

In March 2016. Amazon introduced a monthly payment option for Prime members who could not afford the $99 annual fee. However, you had to be a Sprint wireless subscriber to qualify.

Earlier this year, Amazon opened up the service to all shoppers but made the monthly charge $12.99 because it added perks to the program.

In 2017, Amazon started Amazon Cash, which lets shoppers who don’t have credit or debit cards to load money into their Amazon accounts by handing over cash at partnering retail stores.

Then Amazon introduced a 45% discount to the Amazon Prime monthly fee for shoppers on government assistance.

Ultimately, Amazon wants to drill down into Walmart’s key customer base — cost-conscious shoppers.

Also in the shareholder letter, Bezos talked about high standards.

Bezos shares the story of a “close friend” who was determined to do a “perfect” handstand. — “No leaning against a wall. Not for just a few seconds. Instagram good,” Bezos writes in the letter.

To learn, Bezos’ friend went to a handstand workshop and attained little success. Then, she hired a handstand coach and was able to realize that it takes about six months of daily practice to master the act.

Bezos wanted to emphasize that goals need to be realistic, or you’re just wasting your time.

At the moment, Amazon is continuing to add massive amounts of goods to their Prime two-day shipping list and it is rapidly expanding geographic areas for delivery.

But he seems to be saying that Amazon will commit and take the time to achieve its ultimate goal: Everyone is a Prime customer.

It will be interesting to see how the strategy pans out.