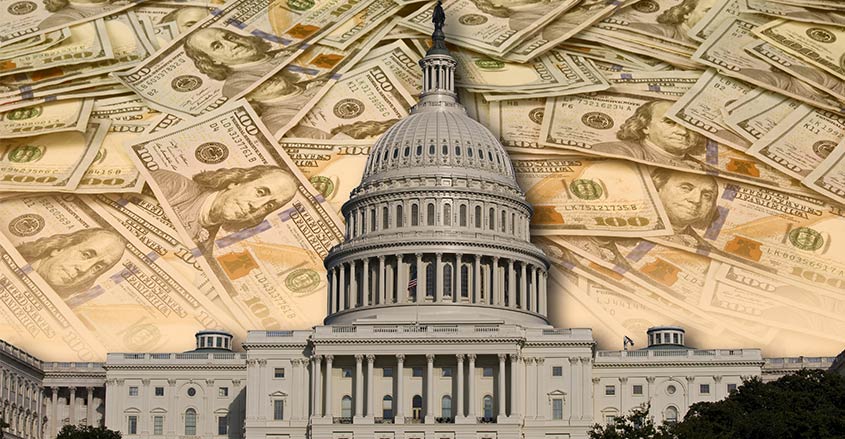 When asked if any of the current sectors of the economy give Dimon any cause for concern, he bluntly replied, “Only in sovereign debt.”

“Right now, people think central banks around the world can do whatever they want.”

Mr. Dimon takes issue with the negative interest rates that currently in place in parts of Europe and Japan.

“They’re [bankers] intelligent, looking at all the facts trying to figure out what to do. But [inflation] would be the big negative surprise.”

These low-interest rates have played a large part in keeping the market smooth amid increasing levels of debt.

Were inflation to dash higher suddenly, the government’s first course of action would be to raise interest rates.

However, this then creates a cause and effect scenario where government borrowing would become considerably more expensive.

“I think it’s very hard for central banks to forever make up for bad policy elsewhere. And that puts them in a trap,” said Dimon.

“Do you know anyone who’s actually bought a negative interest rate bond?”

“I would never buy a negative rate bond. Not unless I was forced. In history, whenever you see something like that, it doesn’t necessarily end well.”

“Let’s just say that you knew that tomorrow the ECB, the Bank of Japan, and the Fed were going to make [an] announcement.

“The announcement is that we will be ending QE, and we will not buy when the assets mature… we will not roll over any more of that debt, corporate debt, sovereign debt, all that will be rolled off.”

The Fed recently said the opposite, that quantitative easing (QE) is now effectively limitless in the face of the impact of the coronavirus on the economy.

While that take some pressure off, there’s no reason things couldn’t go the other way and even more swiftly once the virus threat has passed.

Once banks stop printing money, all bets are off, Pento warned.

“What do you think would happen to the stock market? I think that it would be lock limit down.”

“When junk bond yields implode, because that’s the nucleus of the crisis, that is when you’ll see me go net short the market in my portfolio, in the inflation/deflation and economic cycle model.”

Pento concluded, “the world was ending in 2008, instead of taking our medicine then and allowing for a deflationary depression to wipe out all the imbalances, we levered up on everything.”