On Monday, December 21, Tesla (TSLA) joined the S&P 500 Index. In my 33 years in this business, I have rarely seen the inclusion of one single stock be able to move the metric meter on the overall index as much as this one. 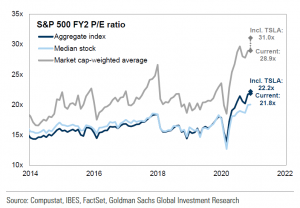 As seen, whether one uses a market-cap or an aggregate approach, the overall S&P 500 P/E will move up from the addition of just this one stock alone.

The inclusion of Tesla now only pushes it even higher.

A chart of TSLA stock performance year-to-date relative to the S&P 500 is show below. One other amazing observation here is that if Tesla had been an S&P 500 constituent all year long (in other words, added on January 1, 2020), the share’s performance by itself would have single handily lifted the total index return by roughly 200 basis points, from around 15% to 17%!

This would seem to indicate that the future performance of this one stock alone could have a measurable impact on the return of the S&P 500. 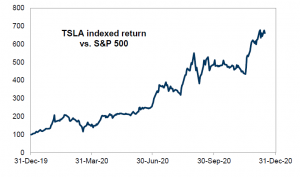 Again, all of the above from the inclusion of one stock to the S&P 500 is astounding.

The fact that an enormous amount of professional money managers are indexed to this benchmark, which is now linked to this one stock to the degree that it is, should be considered and heeded by all investors.