Those who purchased stock in Microsoft in the early days, when Bill Gates was introducing the personal computer operating system that would eventually dominate the market, saw the price of the stock rise astronomically from 37 cents in 1987 to $45 in 2000.

After 2000, Microsoft stock followed a normal path for companies that have entered maturity.

Its stage of spectacular growth was over, most securities analysts and investors viewed Microsoft as a large, bland and uninspiring company whose best era was behind it.

From 2000 through 2012, the price of the stock was mostly flat, trading in a narrow range, reflecting a company with a stable and reliable earnings history.

However, beginning in 2013, Microsoft was growing once again — at a dizzying and accelerated rate.

It may come as a surprise to many long-term Microsoft shareholders that the engine driving the company’s growth since 2013 has not been its Office Suite of products nor its Windows operating systems, but rather revenue generated from its cloud computing tools and services.

As the percentage of corporate employees who rely on their mobile computing devices increases, companies increasing need robust cloud services systems to integrate with these non-desktop platforms. Microsoft has decided to help fulfill the need by becoming a major player in the corporate cloud services market. 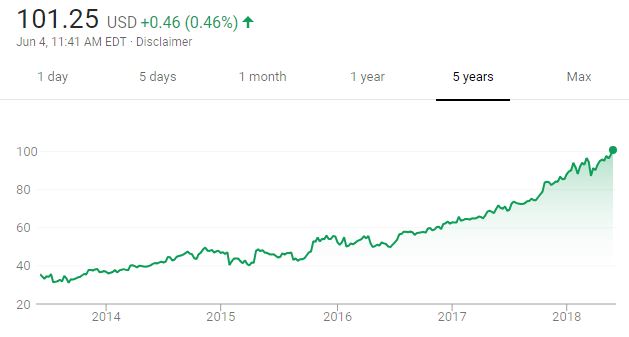 Satya Nadella, Microsoft CEO since 2013, has made it clear that the company’s strategic business model now anticipates cloud networking services will drive most of the corporation’s growth.

During the same period of time, revenue, the bulk of it derived from network services offerings, increased from $40 billion to $100 billion.

Microsoft shares are up 42% for the past 12 months versus 19% for the Dow Jones Industrial Average. The company expects its revenue to be up 13% from last year.

Microsoft thus has experienced it fastest rate of growth in over a decade.

Other tech companies have aimed to be players in the burgeoning and profitable cloud networking market.

Amazon has long offered its own extremely profitable version of cloud computing services and Google has been angling to compete as well.

The challenge for Microsoft is that it is betting the farm that it can establish itself as a dominant player in the market; its future rate of growth is entirely dependent on its success in this endeavor.

Both Google (advertising) and Amazon (online retail sales), by contrast have existing established businesses they can fall back on.

Only time will tell if Microsoft’s audacious cloud networking bet will pay off.