Remember when Netflix was a mail-delivery DVD company?

That was the extent of its business; its main competitor, Blockbuster. But, while Blockbuster went the way of the Dinosaur, its former rival is now a media goliath.

Netflix dominance in the entertainment market is one of the reasons federal district court judge Richard Leon approved the merger between AT&T and Time Warner, ruling that the combination did not violate anti-trust laws.

Judge Leon ruled that the acquisition under anti-trust law would not be harmful to the consumer nor would it result in predatory business practices or price fixing.

Judge Leon’s application of the facts in the case to the applicable anti-trust law reveals in a nutshell how Netflix by no means certain bet on the future of entertainment has paid off handsomely.

In the early days, Netflix was not a threat but rather a partner with Hollywood and the traditional media players. At that time, Netflix produced no original content and relied entirely on distribution or licensing agreements with the content owners, Hollywood studios and cable providers.

That arrangement was mutually beneficial: Netflix provided the studios with significant income from licensing fees for the right to rebroadcast its TV series and movies.

That arrangement began to change in the past few years as Netflix itself began to produce original content.

At first, the offerings were mediocre and second rate — understandable for a company with no experience in the movie industry.

As the original content improved, Netflix became serious about securing directors and producers with experience in the industry who were associated with winning TV shows and movies. In addition, “A-List” actors and actresses began appearing in Netflix original movies and TV series.

Five years ago, many would have viewed this as a highly unlikely scenario.  Now that Netflix is increasingly becoming a dominant player in the entertainment industry, Hollywood directors, producers and actors are coming aboard without reservation. 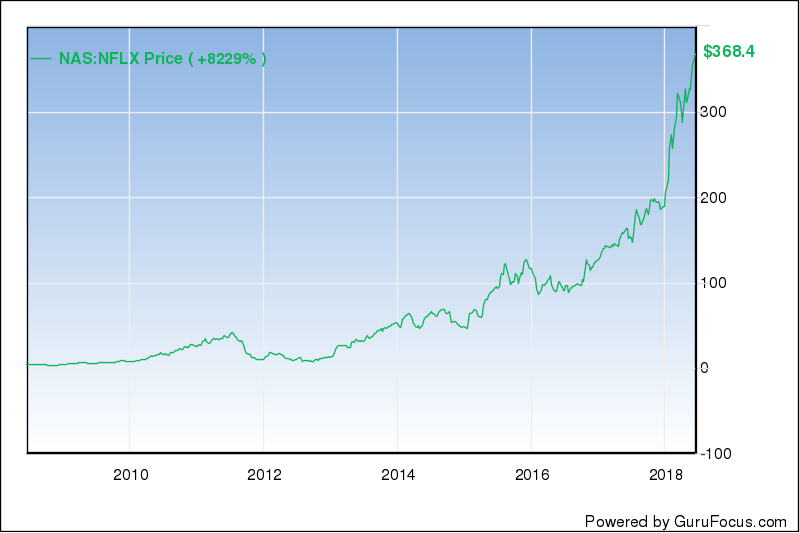 As bandwidth and cable delivery systems improved, Netflix found itself suddenly at the top of the heap as an entertainment content distributor. Its revenue followed suit.

Those investors who placed their bets with Netflix early on have been handsomely rewarded. The stock price has risen form 74 cents in 2003, to its closing bid on June 10 of $360

Netflix has 131 million subscribers world-wide, subscribers who remain with the company because of its diverse offerings available anytime. Its latest quarterly subscriber growth numbers exceed Wall Street analysts forecasts as well as its own expectations.

These favorable numbers have been reflected in the stock price, which has increased more than 60% in 2018. Netflix stock has outperformed its fellow tech giant peers, in part due to the justifiable expectations of investors that impending regulations for Facebook and Google will adversely impact their business models.

Whether or not the traditional players in the media industry will be able to stand up to the Netflix threat, remains to be seen. What is certain however, is that Hollywood is no longer the only game in town.