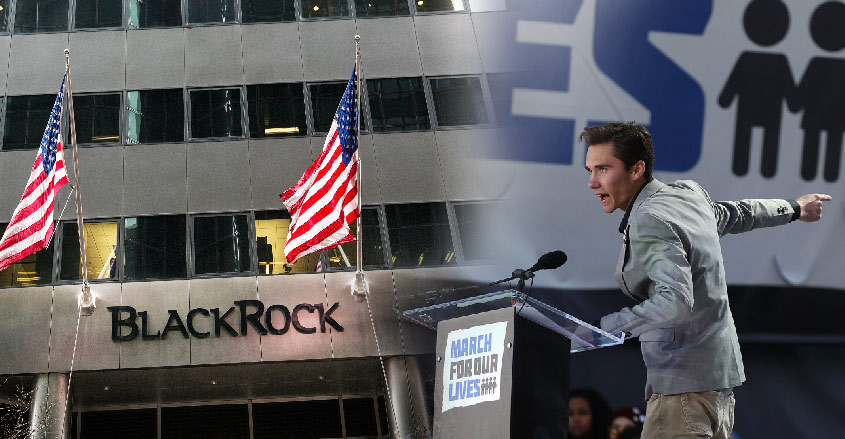 David Hogg, one of the students who survived the mass school shooting in Parkland, Florida is calling on investors to boycott BlackRock Inc. and The Vanguard Group

These are two of the largest investment-management companies in the country, overseeing the retirement funds of millions of Americans. Most have never given a second thought to what they own in the funds.

The Feb. 14 mass shooting at Marjory Stoneman Douglas High School in Parkland, Florida led to the deaths of 17, of which 14 were students and three school staff, and left 17 more wounded. A former student, 19-year-old Nikolas Cruz, confessed to the shooting.

According to police, Cruz used an assault-style rifle and carried multiple magazines, setting off a fire alarm and then shooting his victims as they fled the school.

Hogg’s reasoning is that investment fund holdings in gun companies, while small per individual investor, nevertheless add up to major support for gun makers and sellers.

“[BlackRock] and [Vanguard] are two of the biggest investors in gun manufacturers; if you use them, feel free to let them know,” Hogg said Tuesday.

.@blackrock and @Vanguard_Group are two of the biggest investors in gun manufacturers; if you use them, feel free to let them know. Thanks 😉

In the past, both companies have faced pressure from gun control advocates to sell their gun stocks, but with the March For Our Lives movement gaining steam, this will undoubtedly heighten the situation.

BlackRock is actually the top shareholder in gunmakers like Sturm Ruger and American Outdoor Brands. They are the second-largest shareholder in Vista Outdoor.

Vanguard has fiercely responded by saying that most Vanguard funds “do not have exposure to gun manufacturers.” Of the company’s 388 funds, 359 don’t invest in Sturm Ruger, American Outdoor Brands or Vista Outdoor.

“Importantly, Vanguard is taking action, meeting with the leaders of gun manufacturers and distributors,” the company said in a statement.

“We want to know how they will mitigate the risks that their products pose and how they plan to help prevent such tragedies from happening again.”

BlackRock did not directly comment on Hogg’s tweets, but they have pointed to action the company has taken in recent months.

BlackRock has said it will offer gun-free retirement funds because of consumer demand. They are also very outspoken about policy discussions with lots of weapon manufacturers.

Vanguard had more to say on the topic of policy.

“We believe that when a business poses a risk to society, it can also pose a risk to investors,” the company said.

“We are expressing this viewpoint directly with company leaders because we believe greater focus and transparency on these issues will ultimately benefit society and investors alike.”

Hogg also has been a major opponent of other companies with ties to the National Rifle Association, such as FedEx and Hertz.

It will be interesting to see what effect Hogg’s activism will bring for these companies, but it is certain that the whole issue of investor responsibility is getting plenty of media attention now.

Recently, Hogg has also tried to get advertisers to boycott Laura Ingraham’s show because she mocked him for not getting into certain colleges.

Some of the network’s regular advertisers since have avoided “The Ingraham Angle” in response.