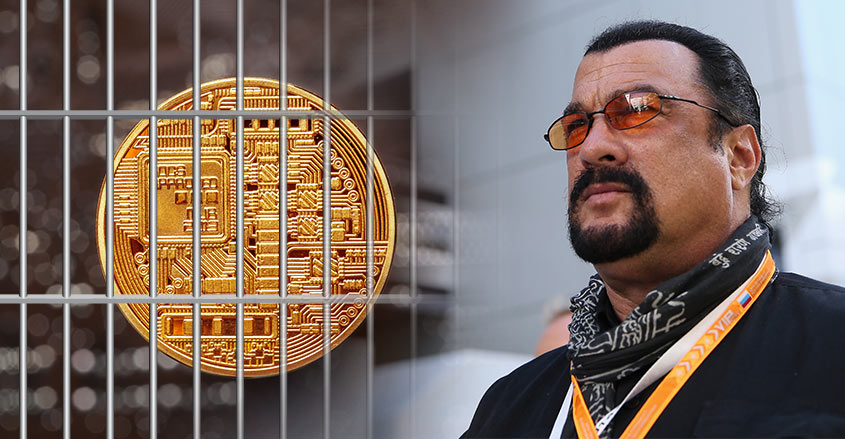 A company which promoted itself as the “next generation of Bitcoin” with no whitepaper, no team description, no utility for the coin in the market or the real world, and an only recently acquired Bahamian registration — but which did have the backing of 1980s action film Steven Seagal — has been shut down.

The State of New Jersey Bureau of Securities recently filed a cease-and-desist order stating that “Bitcoiin” is actually an unregistered security and in violation of state law.

The company claimed to have raised $75 million in their initial coin offering (ICO). It did not disclose how much it paid Seagal for his endorsement.

Bitcoiin, also known as “B2G,” has been plagued by further accusations that it’s a pyramid scheme and riding on a close name association with Bitcoin to steal some of the established coin’s luster.

“Bitcoiin” leadership rebuked those allegations in a public statement. Meanwhile, New Jersey explicitly mentioned Seagal in the order and even took a dig at his credentials as a crypto-advocate.

“The Bitcoiin Websites do not disclose what expertise, if any, Steven Seagal has to ensure that the Bitcoiin investments are appropriate and in compliance with federal and state securities laws,” the order states.

The order notes that while the Bitcoiin website promises investors returns of 12% per year on tokens — a startling return for any legitimate investment — the fine print states that buying tokens “carries no promise of any return, profit or gain,” which the New Jersey order points out is a glaring contradiction.

Bitcoiin attempted to shield itself from securities regulators by stating that any price gains will come from market dynamics alone and not the efforts of the Bitcoiin team, even indirectly — a primary factor for determining if a digital token is a security or not.

New Jersey, however, said the startup offers no evidence to back this claim.

The order concluded that the Bitcoiin team is offering unregistered securities, “engaging in fraud in connection with the offer or sale of securities,” and making “materially misleading statements” to potential investors.

Seagal has constantly reinvented himself over his long and varied career. He became an Aikido black belt in the 1970s, an action star in the ’80s, in the ’90s claimed to be recognized as a reincarnation of a 12-century Tibetan monk.

In between was a brief stint as an arms dealer followed by a spate of sexual harassment allegations and finally a refashioning as a right-wing patriot, part-time sheriff and reality movie star.

Seagal’s endorsement was heavy on metaphysics and light on technical details or even why he choose this coin out of thousands to champion.

“Flow with whatever may happen and let your mind be free. Stay centered by accepting whatever you are doing. This is the ultimate,” Seagal stated in a press release.