As most of you know, stock prices in general, as measured by the major stock market indices, rose sharply over the past eight-and-a-half years, with the Dow Jones Industrial Average increasing by 18,497 points (283%), the S&P 500 Total Return Index advancing by 405% and the Nasdaq Composite Index gaining a whopping 518% from March 9, 2009, when stocks bottomed, through July 23 of this year.

Although most financial journalists, mutual fund managers and so-called Wall Street “experts” are cheering the market’s performance on a daily basis and forecasting stocks to continue to rise during the coming months, my research indicates that stocks are in the process of peaking.

Before reading further, please note that I’m not one of those perennial gloom-and-doomers who tend to always focus on negative economic, financial and geopolitical developments while overlooking positive factors and developments.

Quite the contrary, I advised financial market participants on February 17, 2009 — 18 days before the major U.S. stock market indices bottomed on March 9, 2009 — to get 100% invested in stocks, writing in an article for Newsmax Media on that day titled “Buy Stocks Now, While They’re Down.”

A separate article that I wrote on March 23 of that year was titled “New Bull Market Here; Buy Before It Is Too Late.”

I’ve been mostly bullish since then, accurately predicting that Donald Trump would be elected as the United States’ 45th president and that stocks would rally sharply in the event of a Trump presidency.

But, unlike most investment advisors, stockbrokers and financial newsletter writers, I’m also not a perennial bull that advises their clients and subscribers to always remain fully invested in the markets.

For example, I advised investors on September 18, 2007 — only 19 days before the major U.S. stock market indices peaked on October 9, 2007 — to get completely out of stocks and to invest in inverse-equity exchange-traded funds (ETFs) that appreciate when stock prices decline.

From the market’s peak on October 9, 2007 through the end of 2008, investors who followed advice saw the values of their portfolios appreciate by 5.6% while the S&P 500 Total Return Index declined by 37% and most investors were running for the hills.

Yes, the United States’ unemployment rate declined during May to its lowest level since April 2000. U.S. corporate profits rose during the first quarter of this year by the biggest year-over-year rate since the first quarter of 2012. Manufacturing activity around the world is the most robust over the past several months since mid-2004.

So what leads me to think that stocks are in the process of peaking?

My answers are outlined below:

Below, are some specific examples of the weakening housing market.

The U.S. Department of Commerce reported on July 18 that initial work on the construction of new, privately-owned U.S. homes (new housing starts) declined during June by 12.3% compared to the prior month and by 4.2% compared to the same month a year ago.

That’s the biggest monthly decline in new housing starts since November 2016 and the biggest year-over-year decline since December 2017.

Additionally, Commerce reported on that same day that the number of building permits issued for the construction of new homes declined during June for the third consecutive month and by the biggest year-over-year rate in two years. Those declines suggest that new housing starts continued to fall during July.

Separately, the National Association of Realtors (NAR) reported on July 23 that sales of previously-owned U.S. homes (existing home sales) declined during June for the third consecutive month and to the lowest level since January of this year.

Looking forward, there’s a good chance that existing home sales are continuing to decline, with the NAR reporting on June 27 that the number of contracts signed by prospective homebuyers to purchase a previously-owned U.S. home within the ensuing two months (pending home sales) fell during May, the latest month for which data are available, for the fifth consecutive month and to the lowest level since January.

In regard to U.S. inflation rates, the year-over-year change in the country’s consumer price index, which is based on the average price of a broad group of U.S. goods and services, rose to 2.8% during June of this year from only 1.6% during the same month a year ago.

U.S. manufacturing companies reported sharp increases in the prices of raw materials, as well as big increases in shipping costs, over the past few months. I expect manufactures to increase the prices of their finished goods and for U.S. retailers to pass those prices increases along to their customers.

Hence, there’s a good chance that the consumer price index will continue to increase during the months ahead.

The fact that the United States imposed substantial tariffs over the past few months on imports of goods from China, the European Union and Mexico also suggests that the consumer price index and other measures of inflation will continue to increase during the coming months.

As a result of the acceleration in U.S. inflation rates, I expect the Federal Reserve to continue to increase the target range for its overnight lending rate, the federal funds rate, through at least the end of this year and for investors in U.S. bonds to demand considerably higher yields on such bonds during the months ahead. 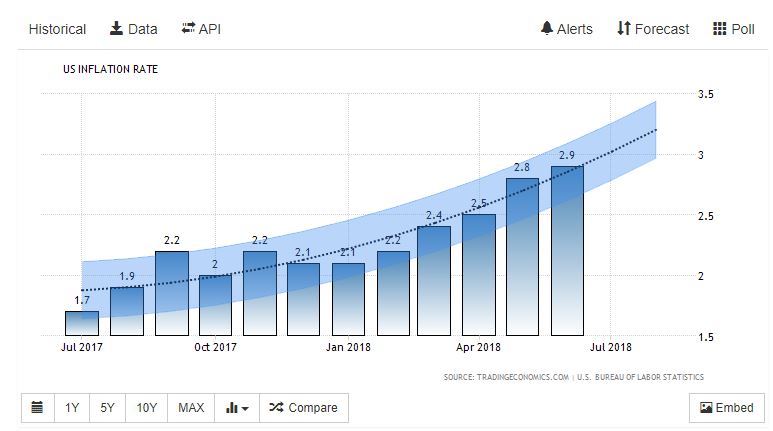 Executives at institutional investment firms appear to agree with my forecast, even though their telling individual investors that stocks will continue to move higher.

Those firms increased their holdings of cash-like investments (e.g. money-market securities) substantially over the past seven months and those same big-money investors decreased their investment allocations to cyclical stocks while increasing their allocations to “defensive” stocks during each of the past two months, according to data released by the Federal Reserve and State Street Global Advisors.

Although there’s a good chance that stocks will continue to move higher over the next couple of months as a result of publicly-traded companies continuing to buy back huge amounts of their outstanding stock, the factors and developments discussed above suggests that stock prices, in general, will likely peak by the end of this year.

So, does that mean that I’m recommending for investors to get out of stocks and to stash their savings under their matrices?

Quite the contrary, I’m finding numerous stocks, on a daily basis, that my research indicates will rise sharply over the next 12 to 18 months and many others that will likely be very volatile but that will likely offer opportunities to generate substantial returns during a very short period of time, without taking undue risks.

Additionally, I’ve put together a list of stocks that would likely be present fantastic sell-short opportunities in the event that my forecasts were to come to fruition.

To learn about those stocks, and the right times to invest and trade them, I encourage you to try one or both of my stock market newsletters, Small-Cap Profit Confidential and Maximum Profit Trader.