That is why we encourage our children to attain as much higher education as possible before they look for work in the real world. The world is not fair, especially to the naïve and educationally unprepared.

Parents hope that their children gain knowledge and skills in college that can then be used in the real world.

Studies conducted by the Bureau of Labor Statistics do show a connection between education and salary earning potential.

People who attain a general equivalency diploma, or G.E.D., can expect to make about $500 a week. Those with only a high school diploma will make $750 a week.

Getting a bachelor’s degree increases that amount to $1,173. Those who get a master’s can look forward to making $1,401-a-week. 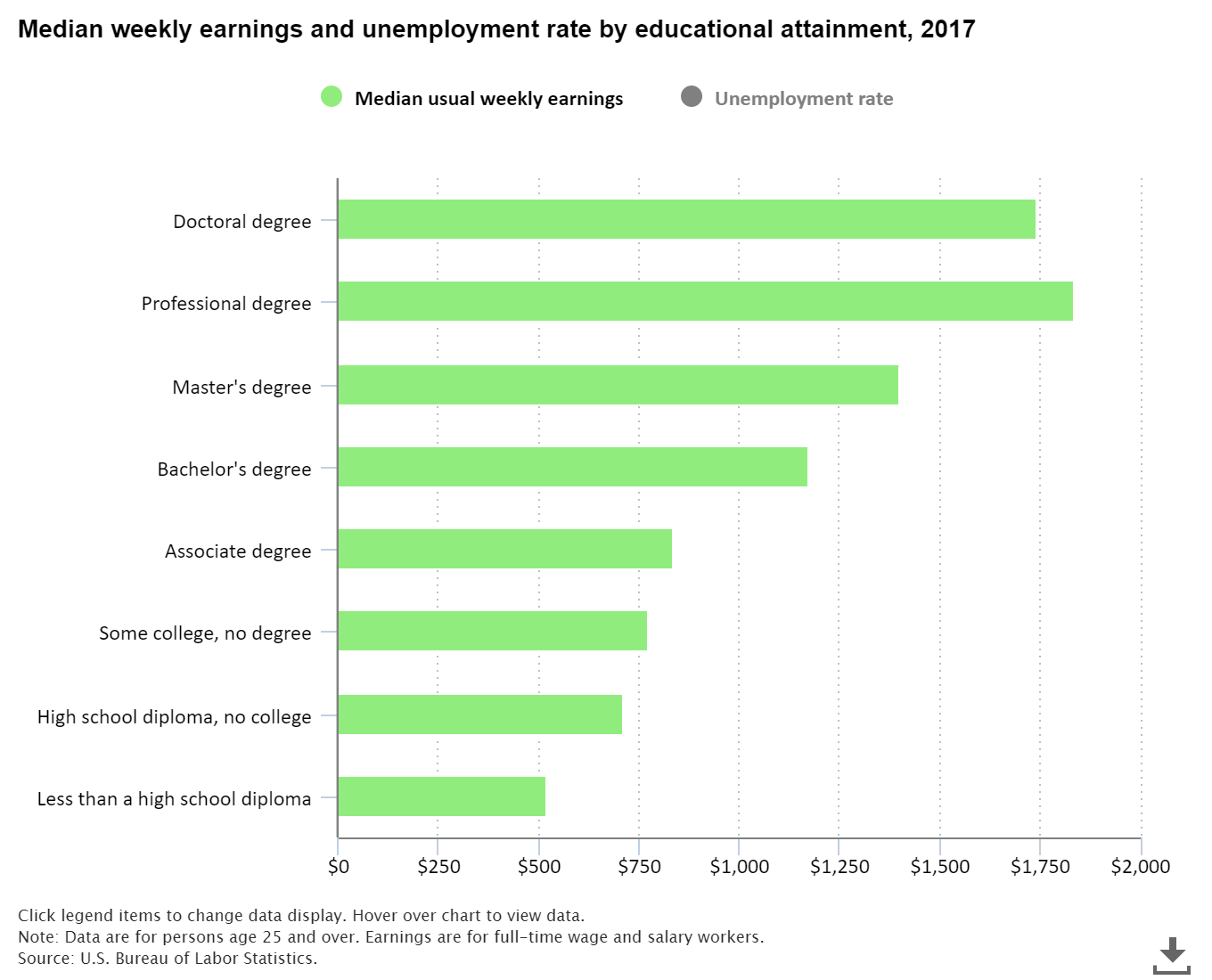 However, nothing in life is free. We teach our children that you can only get or achieve great things in life with study and hard work. What makes the issue even complicated is that most exclusive and prestigious schools have high admission standards.

Harvard and Stanford University both accept only about 5% of all applicants who apply.

Children and parents nevertheless are told that they have a chance based on the merits of hard work. Yet the recent college admissions scandal revealed that ideal to be a lie, brutally exposing how the wealthy are accustomed to buying college admission status for their children.

What is shocking about the college admissions scandal is what wealthy parents were willing to do for their children. These are children of the wealthy, people who don’t have to worry about money.

Being born in to wealth, they have every advantage they need to get ahead in life. Yet their parents were willing to engage in criminal activity on their behalf, likely because the parents understood their kids’ actual academic potential.

While the rejection rate for some of the more prestigious colleges and universities can be as high as 95%, wealthy parents regularly donate money to academic institutions and finance the construction of new campus buildings to leverage admission favors for their children.

This is not illegal, but big donations run into millions of dollars. The college admissions scandal reveals that there are affordable alternative options to writing big checks for those who want to buy education access for their children.

Known as Operation Varsity Blues, the bust was based on an FBI investigation detailing a $25 million college entrance cheating system.

Over a period of years, a college admission facilitator named William Singer helped more than 850 privileged children of the wealthy get into colleges for which they arguably weren’t qualified.

More than 50 people, including celebrities Felicity Huffman and Lori Loughlin, were charged in connection to the scam.

Cheating to get in

Singer allegedly used both as a way to solicit money from wealthy individuals to help get their children into prestigious colleges via “side door” admission schemes.

Parents are alleged to have paid anywhere between $15,000 and $6.5 million for Singer to concoct ways to get their academically unqualified children admitted.

According to the FBI, Singer would hire people to impersonate students and take admission tests in their stead. Or, he paid proctors to change a student’s wrong answers to the right answers after a test.

According to news reports, Huffman paid more than $15,000 to get her child unlimited time to take an SAT test. The actress Lori Loughlin and her husband, designer Mossimo Giannulli, allegedly paid $500,000 to get their two daughters into the University of Southern California.

The FBI says Loughlin arranged for one of her daughters to be photographed on a rowing machine in order to make the false claim that her child was a crew coxswain with the L.A. Marine Club team on an admissions application.

In some cases, the FBI states, Singer arranged for the faces of the children of some of his clients to be superimposed on the bodies of actual athletes for similar endeavors.

Singer is alleged to have arranged for academic coaches to be bribed for identifying applicants as athletes when they weren’t. Additionally, Singer is charged with identifying the children of rich parents as being disabled to allow them to have extra time for test taking.

The scandal involved privileged students trying to get into schools such as Georgetown, Stanford, Yale, Wake Forest University, the University of San Diego, and others.

The schools weren’t overtly involved in the scam, only certain personnel, such as sports directors and coaches.

The scandal exposed the reality that some of the rich, privileged, and powerful lie, cheat, and bribe their way to status. Although the children of the accused are presumed to be innocent, they have been scandalized.

Olivia Jade Giannulli, one of Loughlin’s daughters, had a budding career as a social media influencer with millions of followers. Giannulli subsequently has lost lucrative business deals with Sephora and TRESemme in the wake of the scandal.

Meanwhile, all of the children connected to the scandal, whether they knew are not, are humiliated. Many may drop out or be barred from their schools.

Huffman, Loughlin, and all of the others being investigated, may face more charges or possibly even jail time. As well as becoming public laughingstocks, they have publicly embodied obscene social privilege. And, made a lie of the fact that academic merit is all that is needed to get into college.

The scandal is insulting to parents and students who work hard and apply to prestigious schools. Although it can’t be quantified, many deserving students from working class backgrounds may have been denied spots in such schools to make room for fake athletes from rich families.

Meanwhile, California woman, a former teacher and parent, has filed a $500 billion lawsuit against all involved in the scandal.

Tuition expenses for one year of college can cost as much as $55,000. Nearly 45 million Americans collectively owe $1.5 trillion in student loan debt.

If no real consequences result from this scandal, it will be harder than ever to believe that one can get ahead in life with just hard work and academic merit.