In a bid to reignite its pop culture relevance in the dawning crypto age, and to help make cryptocurrencies legit as a form of payment, electronics and video game entertainment company Atari recently announced it will launch its own brand of cryptocurrency.

The news sent shares of Atari, essentially a penny stock priced in euros, surging well over 60% on the news. It has since fallen back. 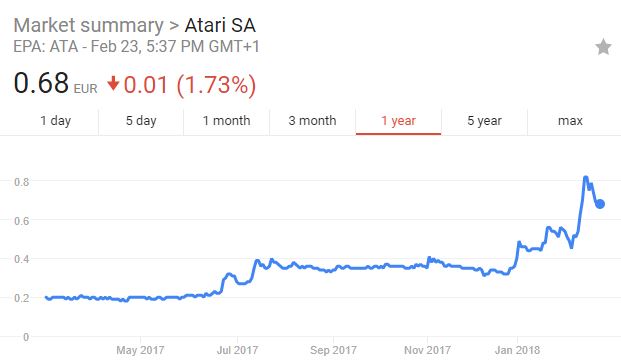 The company that created video gaming with once-ubiquitous titles such as Pong, Pac-Man and Space Invaders says it will offer two kinds of signature cryptocurrency tokens — one for online video gaming and entertainment and another for online gambling.

Paris-based Atari will not be creating these new digital currencies. Instead, the company will release its own brand of cryptocurrency tokens in a partnership deal with a company called Pariplay.

Atari also has teamed up with a company called Infinity Networks for its online entertainment platform’s logistics and proprietary infrastructure.

Infinity Networks will create an online entertainment platform, a kind of digital storefront, where the Atari-branded cryptocurrencies supplied by Pariplay will be used for online transactions.

Infinity Network will acquire a long-term licensing deal for the rights to use the Atari name while Atari will get a minority holding share in Infinity Networks in exchange.

The two new currencies are the Atari Token and the Pong Token.

The CEO of Atari, Frédéric Chesnais, praised the potential of blockchain technology in particular to revolutionize business practices in the digital age, saying that, “we have the opportunity to position ourselves attractively in this sector.”

“Blockchain technology is poised to take a very important place in our environment and to transform, if not revolutionize, the current economic ecosystem, especially in the areas of the video game industry and online transactions,” Chesnais said in a statement.

Atari merged with a French gaming company called Infogrames Entertainment, known for revolutionizing the arcade and then video gaming industries. Infogramest then adopted the Atari brand.

Atari is most famous for creating the 1972-released home video game Pong. In recent times, the brand name has lapsed into relative irrelevance, known more for its logo on hipster T-shirts than on actual products.