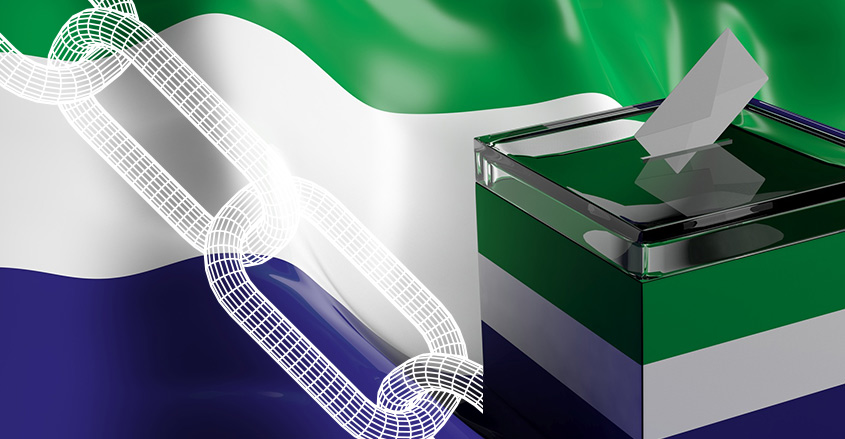 The Swiss company that engineered it, Agora, claims it will prevent fraud, even though the voters themselves were never told about the technology.

“You’re looking at a country that you probably wouldn’t normally expect to be the first to use transparent voting tech,” Agora COO Jaron Lukasiewicz told CoinDesk.

“Voters complete their votes on paper ballots and then our team with impartial observers register them on the blockchain.”

A whopping 16 candidates, including journalists and businessmen, ran to replace him.

No candidate got 55% of the vote outright, so the election goes to a run-off on March 22 between the two Samura Kamara, the foreign minister, and Julius Maada Bio, former military head of state and candidate of the main opposition party.

Agora used a permissioned blockchain, which means while the votes can be viewed by everybody they can only be validated by someone with the authority to do so.

A lack of trust in elections occurs everywhere in the world. The United Nations and United States regularly send teams to verify elections.

Africa has an additional level of complexity due to incumbents in power for decades, ethnic and tribal loyalties closely aligned with candidates, political parties, and economic rewards.

Often, there is violence and intimidation at the polls.

Agora CEO Leonardo Gammer said Sierra Leone’s ruling party was “open minded” about the potential of blockchain in its elections. “I also thought that if we can do it in Sierra Leone, we can do it everywhere else.”

Depending on the results, Agora is in negotiations with several other nations to engineer their blockchain elections and even roll out a global platform.

The company calls this a “skipchain” and it functions as a stack of services designed to reach consensus with each node.

For elections, the lowest level of the stack consists of “write-permissioned” nodes operated by Agora and third-party witnesses, Red Cross, École Polytechnique Fédérale de Lausanne (EPFL) and the University of Freiburg, as well as “read-only” nodes that let anyone observe the data for themselves.

Despite using a cutting-edge technology, the outcome will be only as good as the candidates. No one seems excited about either party, both of which are plagued with corruption charges.

Whoever wins has a heroic task of rebuilding in front of them and will likely need the opposition’s help, as well as massive amounts of foreign aid.

Sierra Leone might best be known for a 2014 outbreak of Ebola that led to 5,000 deaths including a 1,000 children and an estimated loss of $1.4 billion to an already shattered economy.

Last year’s mudslides and floods made the capital nearly unlivable. Sierra Leone is one of the world’s poorest countries and suffered a bloody civil war during the 1990s that left 55,000 dead and a 100,000 wounded.