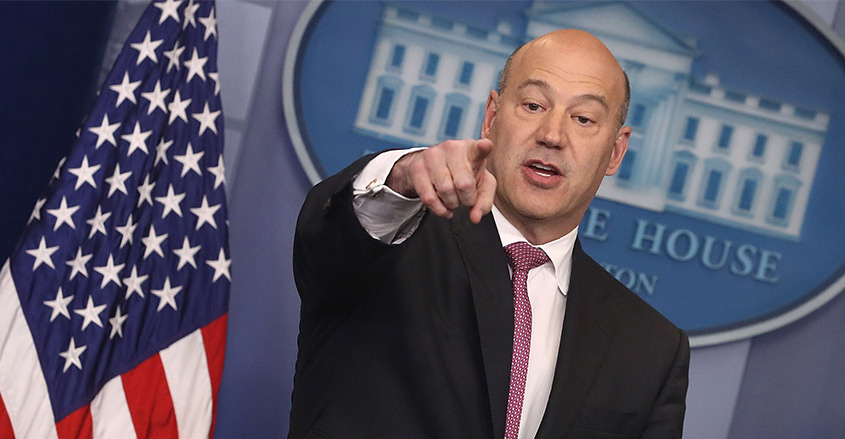 The former top White House economic adviser stepped down after a reported clash over President Trump’s plan to place tariffs on imported steel and aluminum.

While other Goldmanites leaving the government are going back to the investment bank, rumors abound that Cohn is launching his own fund.

Cohn reportedly told Trump that as economic advisor he was “operating at 10% to 20% capacity.”

When asked what field would bring him to 100% he replied, “I haven’t made a final decisions yet, but the innovations in AI, materials, and even space are all next generation type opportunities I will be considering.”

Cohen has reportedly spoken with Musk about some type of partnership, but Musk has been wary of taking on partners since his sale of PayPal 20 years ago.

There have also been rumors of Cohn acting as an advisor to the world’s most profitable company, Chinese retail giant Alibaba. The founder of Alibaba, Jack Ma, is a personal friend of Cohn’s.

Cohen had a three-decade career with hedge fund and investment bank powerhouse Goldman Sachs and was instrumental in negotiating the repayment structure of Greek debt after the financial crisis.

Cohn defended Goldman Sachs from widespread allegations that it bet against its own clients during the subprime mortgage crisis. He received a $285 million severance package when he left Goldman Sachs to work at the White House.

Cohn, a former president of Goldman Sachs, had been a bridge between the Trump administration and the business community some of the president’s supporters deride as “globalist.”

A longtime Democrat (as was Trump for a time in his New York real estate days), Cohn is the most recent of three Goldman Sachs alums to leave the White House in three months.

Trump campaigned against Wall Street, the big banks, and even called Goldman Sachs out by name. That he appointed so many of the bank’s stars to positions of influence seemed hypocritical in light of his campaign rhetoric.

Trump gave Cohen a backhanded compliment upon hearing of his resignation: “He may be a globalist but is still a good guy.”

Cohn said he would stay on for a few weeks to try to soften the impact of tariffs and prevent a global trade war.

But his influence on the president has clearly eroded. In the past week, Trump’s tariffs that will hit imports from a range of countries and could escalate if any nation dares to retaliate.

This after Cohn spent months trying to steer Trump away from tariffs and trade wars.

Defense Secretary Jim Mattis and Secretary of State Rex Tillerson, another recent departee, also lobbied against tariffs. But they were eventually outmaneuvered by Commerce Secretary Wilbur Ross, trade adviser Peter Navarro, and by Trump himself.

Global financial markets fell as traders absorbed the news of Cohn’s departure, which removes a prominent anti-tariff voice from the White House.

Goldman Sachs stock also fell 2% after the news and the realization that their key man in the White House was on his way out.