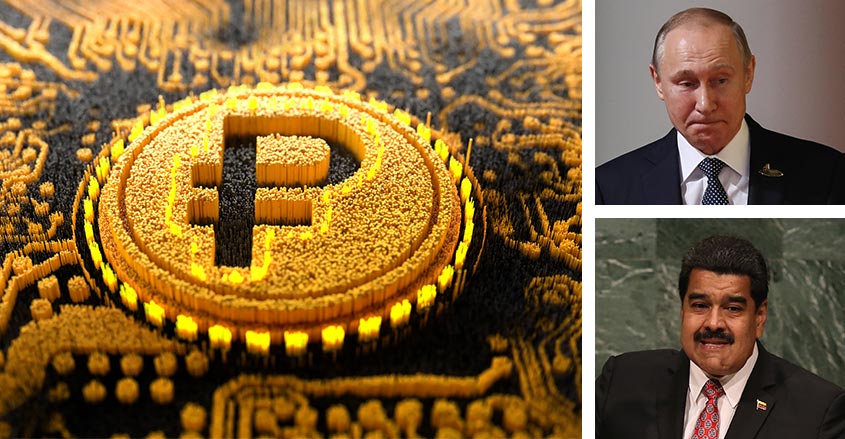 A year ago Bitcoin was dismissed as the delusional creation of online gamers ranting on Reddit from their parents’ basements.

Now world powers facing off against the United State’s financial and political hegemony embrace the nascent cryptocurrency as a counter to America’s dominance.

Russia is estimated to have lost more than $60 billion from sanctions enacted in March of 2014 resulting from its annexation of Crimea.

Many of Russian leader Vladimir Putin’s top aides have been hard hit. The sanctions seize assets and prevent the movement of money between accounts owned by the blacklisted parties and American and allied banks.

One of Putin’s aides, Vladislav Surkov, openly mocked the sanctions, saying, “The only things that interest me in the U.S. are Tupac Shakur, Allen Ginsberg, and Jackson Pollock. I don’t need a visa to access their work. I lose nothing.”

Putin however is believed to be worth between $25 billion and $50 billion, and much of that wealth is likely held abroad. Using a cryptocurrency that allows for untraceable payments back and forth makes U.S. sanctions pointless.

Venezuela also is a target of U.S. sanctions since August 2017, when the Treasury Department prohibited U.S. banks from loaning money to Caracas and state-owned oil company Petróleos de Venezuela.

The push for a cryptocurrency in Venezuela comes from the country’s beleaguered president, Nicolás Maduro, who promises to back a new crypto named the Petro with the country’s vast oil assets.

Oddly, Venezuela’s plan to back its cryptocurrency with oil assets is a step back in time. No major currency has been backed by real world assets since the United States went off the gold standard in 1971.

Julian Assange thanks you

An obvious issue for both countries is that most users of cryptocurrencies are advocates of less, not more, government control.

The next wave of cryptos such as Ethereum encourage even more decentralization and innovation, even if it’s for something as silly as trading virtual kittens.

If you consider the U.S. dollar the basis of the global fiat currency system, any challenge to it could be decentralizing.

Julian Assange of Wikileaks, for one, has thanked the U.S. for blocking banks and payment processors such as PayPal from sending him funds, a move which has resulted in a Bitcoin windfall over the last seven years.

Not all autocracies are on board. China has ordered all cryptocurrency exchanges in that country to stop trading as of Sept. 15, 2017.

Five initial coin offerings (ICOs) there have been banned and even exchanges in relatively open Hong Kong have complied.

This year will be an exciting one for cryptocurrency as they continue to gain widespread adoption and move from basements to boardrooms and battlegrounds.

How it plays out for the world governments remains to be seen.