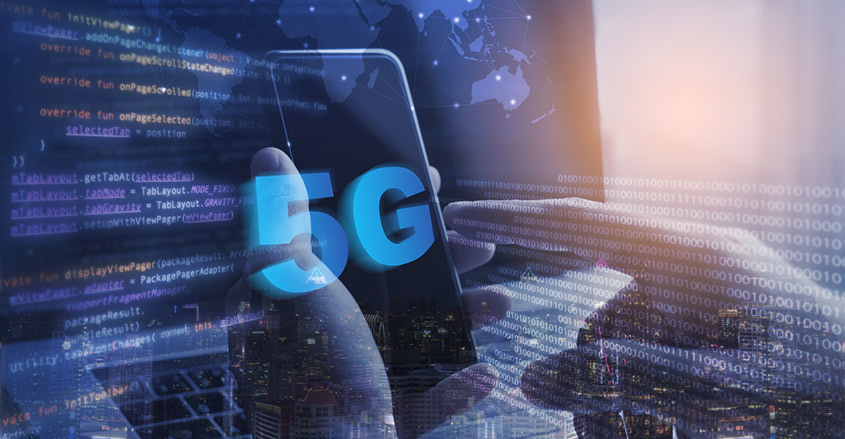 Over the past few years there has been much hype and excitement generated about the quantum leap in wireless speeds offered by the capabilities of the new 5G networks.

Very few, however, have examined the vast logistical, political and cost challenges that will need to be addressed before the promise of 5G becomes a reality.

The new 5G networks are based on an entirely different frequency spectrum than that used by 2G, 3G and 4G. The large antennas used for these legacy wireless networks were placed on large towers that had long-range coverage.

The radio frequency used to carry the 5G signal is a higher frequency, which means its range is much more limited compared to lower frequency/higher range used by the earlier generations of pre-5G wireless networks.

The new frequency spectrum is allows 5G to deliver the promised 10 to 100 times increased speeds.

However, the quantum leap in speeds and enhanced user experience, is not cost-free. The higher frequencies require the transmission antennas be placed closer together.

The physical laws of the electromagnetic spectrum make these cumbersome requirements unavoidable.

The smaller cells must be placed, usually, no more than 800 to 1,000 feet apart. Anyone can do the math. And, the result reveals that streets across the county are going to be littered with the smaller, pizza-box sized antennas.

Adding to the complexity of the infrastructure, these antennas need a power source as well as a fiber-optic connection to the Internet. The U.S. currently has approximately 349,344 cell sites.

To gain some perspective on the number of antennas required for full nationwide coverage, telecom carriers will need to add on an additional 769,000 small cells by 2026.

Taking a trip down memory lane is perhaps one of the best ways to explain why 5G networks are going to take years to build out.

Remember the landscape when wires and antennas were being installed for the broadening of cable TV in the mid to late 1980s?

Well, get ready, because we are going to revisit that era of chewed up streets, massive number of trenches dug in roads and sidewalks; traffic rerouting and jams, as well as irreparably damaged roads, requiring subsequent repairs and maintenance for years thereafter.

Consider the complexity of a typical job that will become routine during the installation of a nationwide 5G network. Fiber technician teams stand by while construction workers dig up a street or sidewalk.

Once the trench is ready, the fiber-optic workers must then manipulate and work on a 1/14 inch wrapped bundle of glass fibers.

A typical 5G cable contains 864 separate insulated strands of wire, each representing a high-bandwidth conduit that leads to a business, residential home or cell tower. Each bundle of wires must be connected to multiple cell towers.

Thousands of engineers, specialized technicians and construction workers must all coordinate for installation of the fiber optic wires and necessary transmission antennas. These activities will be occurring nationwide at different times and at different locales.

It is estimated that the 5G build-out could take more than a decade and leave roads damaged, disrupt commutes and saturate nearly every city block with specialized, smaller antennas.

Here is a thought experiment for those who want to get an approximate idea of the time it will take to set up a nationwide 5G wireless network. A typical residential installation scenario could easily involve the following. One carrier, say, AT&T arrives on your street and starts to dig a trench to lay its fiber cable.

Verizon arrives the next day and performs the same chore; they dig a separate trench located a few yards away from the trench dug by AT&T the day before. Sometimes the companies may coordinate, but that is not certain nor a requirement.

Laying down fiber optic cable will be expensive. In 2017, Verizon purchased $1 billion in fiber optic wire from Corning, Inc. It purchased amounts to 12.5 million miles of cable — enough to circle the earth 500 times.

Verizon intends to make future purchases as well. It is estimated that a nationwide network will require a combined carrier expenditure of between $130 to $150 billion.

Ironically, the actual cost of the fiber is only a small part of the overall expense. One of the biggest expenses will be the cost for digging hundreds of thousands of holes and trenches across the land. Additional expenses include the cost of obtaining city permits and the cost of securing easement rights from landowners.

Perhaps one of the most challenging, cumbersome and time-consuming aspects of constructing a nationwide wireless network is cooperating with local municipalities.

FCC regulations constrain the ability of municipalities to manage the 5G rollout. This is in part due to the unique technical requirements associated with the new speeds. Antennas must be placed closer together to attain the higher speeds.

Depending on local configurations, these antennas could be placed in a hodgepodge manner — on lampposts, telephone poles and office towers. Local cities and towns would have little, if any, input on the placement decisions.

An additional burden on municipalities is the amount they can charge for permits is limited. A massive number of permits will need to be issued by local cities and towns to various carriers. Small towns are not likely to be able to hire additional personnel to handle the increased load.

Many municipalities have filed suit to overturn these restrictions. The increased litigation will inevitably have the effect of delaying the entire build-out process.

Although the promise of 5G has generated a lot of excitement and anticipation, the numerous challenges that will need to be surmounted ensures that consumers won’t be enjoying blazing 5G speeds on their mobile phones anytime soon.