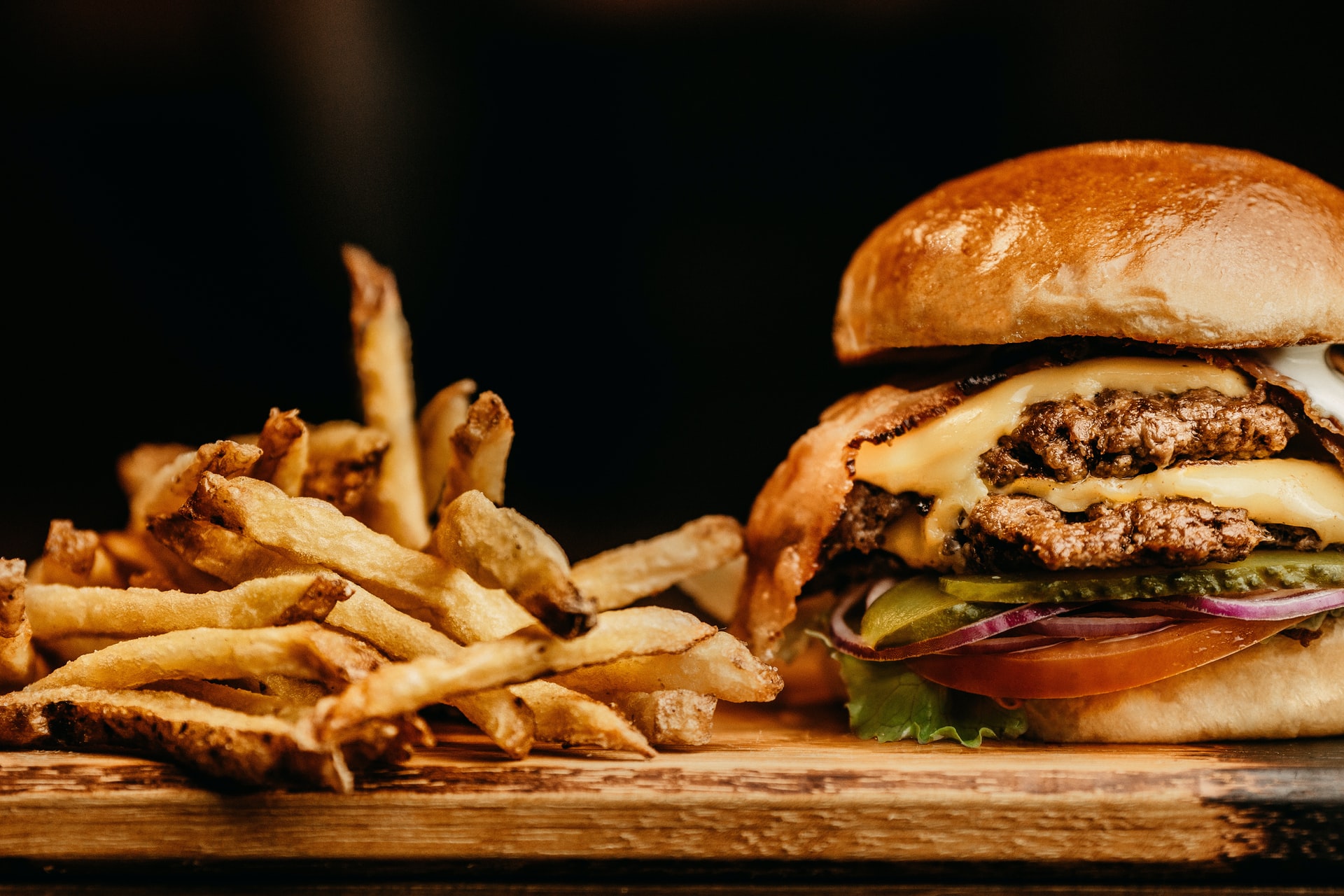 I believe that fast food was one of the first things I gave up along my health journey. After eating real food, what was served at fast food joints no longer tasted good to me, no matter how darn convenient it was.

And don’t even get me started on the smell. Yuck! It is like some kind of strange marriage between a food court and a country fair on a hot August afternoon.

Raising kids with a “no fast food” mentality was not particularly easy. I would go out for the day with other moms to the park, and when it was time for lunch, I was always outvoted and reluctantly tagged along to the nearest fast food eatery.

Back in the day when my kids were little — some 16 years ago — this was just what you did. And, statistics show that moms of today are still doing the same thing, although they may feel better about some of the so-called healthier options being peddled at fast food places.

Well, I got used to always being the black sheep, bringing my own food into these establishments or simply allowing my kids a very, very limited choice on the menu.

Although they didn’t like me much at the time, my girls now thank me for my intervention and persistence, and to this day, they don’t eat fast food.

I don’t know where you are on your health journey or if you have given up fast food for the real deal or not, but it is important to arm yourself with the facts when making such an important decision as what to feed yourself and your family.

I wanted to share with you just a few of the reasons why I continue to stick to my guns when it comes to fast food.

The McDonald’s website admits that this anti-foaming agent is used in the McNugget cooking oil.

This chemical compound is also found in silicone-based lubricants, adhesives, caulks and sealants. Dimethylpolysiloxane may be preserved by several undisclosed chemicals, including formaldehyde.

High-fructose corn syrup is also found in many drinks, such as soda, coffee drinks, energy drinks, and even some fruit drinks.

Consumption of high-fructose corn syrup causes body-wide inflammation and obesity. In high doses, it can literally punch holes in the intestinal lining allowing nasty byproducts of toxic gut bacteria into your system resulting in obesity, diabetes, cancer, heart disease, dementia and accelerated aging. In addition, high-fructose corn syrup contains contaminants, like mercury, which are not regulated by the FDA and are highly toxic.

I love ducks and humans too, but I don’t want to eat feathers and hair. Many fast food restaurants use L-cysteine, an amino acid that is synthesized from feathers or hair to make their meat flavorful and soften breads and pastries.

Do you think those drink machines found in fast food eateries are clean? If you do, you may want to think again. Researchers took ice and toilet samples from ten fast food outlets. Six samples, including McDonald’s, KFC, Starbucks, Burger King, Cafe Rouge and Nando’s, showed higher levels of bacteria in ice than in toilet samples.

Are toilets getting cleaned more frequently than ice machines? Out of the six samples, four actually contained enough microbes to be labeled a “hygiene risk.” Samples from McDonald’s, KFC, Nando’s and Burger King contained more than double the levels of bacteria that are expected to be seen in drinking water.

Sure, wheat sounds like one of the few healthy ingredients in fast food. After all, the food pyramid our government has created recommends eating 60 percent of our calories from wheat. However, modern wheat is an appetite stimulant. When we consume it, we tend to crave more and more. It also raises blood sugar and causes inflammation, which is the basis for a wide range of diseases and illnesses.

A 2013 study published in the journal Annals of Diagnostic Pathology determined that some fast food hamburgers may contain as little as 2% actual meat. Researchers found that half the weight of a typical burger is from water, and some contained “unexpected tissue types such as bone, cartilage and plant material.” Sarcocystis parasites were discovered in two of the burgers.

Many “mystery” ingredients in fast food hamburgers are industrial chemicals, including high-fructose corn syrup and dimethylpolysiloxane.

Acrylamide is a chemical that naturally occurs when potatoes or starchy foods are fried or baked at high temperatures. The chemical is also closely linked to cancer. So, while you may love french fries, you may be adding a serving of cancer to your meal every time you munch down on them.

Fast food is packed with sugar, and many health experts believe that sugar is the main culprit for skyrocketing obesity rates, not fat. Of course, soda is one of the worst offenders and fast food eateries offer these beverages in massive sizes — as large as 64 ounces — translating to nearly 200 grams of sugar. Get this, a small chocolate shake from Burger King contains 83 grams of sugar!

The latest daily sugar intake recommendations from the World Health Organization (WHO) is 25 grams for an adult. This is not added sugar, but total sugar, which would include sugar found naturally in foods such as fruit, dairy and even vegetables. So, in one small shake (12 ounces) you would be getting more than three times the daily recommended amount of sugar.

A substance found in far more fast food than you may think, MSG is sometimes hidden because it is called by another name, including yeast extract and hydrolyzed protein. In other instances, it is lumped in with many other chemicals as a “natural flavor.”

This is bad news, because MSG is a neurotoxin. Some complaints include eye damage, depression, headaches, numbness and disorientation. Because MSG can throw off the body’s glutamate receptors, it is a potential hazard to many systems of the body.

Artificial colorings are manufactured from industrial chemicals. Two common base chemicals include antifreeze and petroleum. The research on many different colorings is quite worrying.

For example, Red 3 has been linked to breast cancer in humans, Yellow 6 has been associated by some research to adrenal and kidney cancers, and Yellow 5 was found to decrease sperm production in mice.

Furthermore, many of these dyes have been linked to behavioral issues in children. They have also been known to cause severe allergic reactions.

Castoreum is a substance found in the castor sacs of both male and female beavers. This aromatic liquid is mixed with urine and used for territorial marking. It is also regularly used by the food flavoring industry.

In fact, an overwhelming majority of raspberry flavored foods are made from these secretions. Foods such as ice-cream, fruity drinks, yogurt, candy and tea may contain these secretions, which the FDA claims are completely safe… NOT!

Potassium bromate is a bread additive found in foods like bread rolls, wraps, bagel chips and bread crumbs. It is used to help strengthen the dough, which reduces the time required for baking, resulting in lower costs.

It is produced using the same toxic chemical found in bromine, an additive linked to kidney and nervous system disorders, hearing loss, digestive problems, and even birth defects and schizophrenia. The agent has been banned in the EU, Canada, Peru, Nigeria, Brazil, South Korea and China.

Arsenic can be found in poultry because the FDA permits it in chicken feed to increase growth. It also causes the meat to appear pinker as it affects the blood vessels, which gives it a more “fresh” appearance. Arsenic is classified by the EPA as a human carcinogen, and the EU has outlawed its use since 1999.

While you may think eating in a fast food joint is only harming your health, think again. Fast food establishments use a staggering amount of packaging — straws, wrappers, boxes, bags, plastic cutlery, packaged condiments, napkins… the list goes on. While much of this is made from recyclable materials, only a fraction of it actually makes it to the recycling center.

The organization Californians Against Waste reports that a 2012 examination of fast food waste in Austin, Texas showed that 85 percent of what was thrown in the trash could have been recycled, or added to compost. This problem is by no means limited to Austin.

Additionally, researchers in Hong Kong found that the greenhouse gas emissions resulting from manufacturing fast food cheeseburgers for one year paralleled the emissions produced by between 6.5 and 19.6 million sport utility vehicles.

Each year Americans spend over 117 billion dollars on fast food alone. Imagine, as a country we are paying for conditions such as obesity, heart disease, diabetes and cancer. When you stop and think about it, how hard is it to prepare your lunch ahead of time to take to work, to bring healthy snacks for your family on road trips, or to go that extra mile to be aware of everything that you are eating and feeding your family?

If you are afraid this will make you weird, that your friends will snub you, or that you may have to spend a few hours each week planning, shopping and cooking… you might want to revisit your priorities.

I have boycotted fast food now for almost 25 years and I still have plenty of friends, plenty of time and the biggest bonus of all…great health!