As I mentioned to my subscribers last week, Bitcoin rallied up to resistance last week at the top of a possible descending wedge pattern (bold purple lines) and stopped just short of its 200-day moving average.

This moving average stopped the previous rally attempt into the May 5th high and it remains possible we’ll see Bitcoin take one more trip to the bottom of the descending wedge to complete the pattern before setting up the next bull market.

As depicted with the red dashed line, a trip back down to the bottom of the wedge would mean Bitcoin could hit the horizontal price support zone at $5,000 to $5,400, probably in September. I’ve talked about this support zone for a couple of months now and while I’m not predicting Bitcoin will get down to that level it remains a possibility.

If it does happen, consider it a gift since it would likely be the last time Bitcoin will see a price that low ever again. 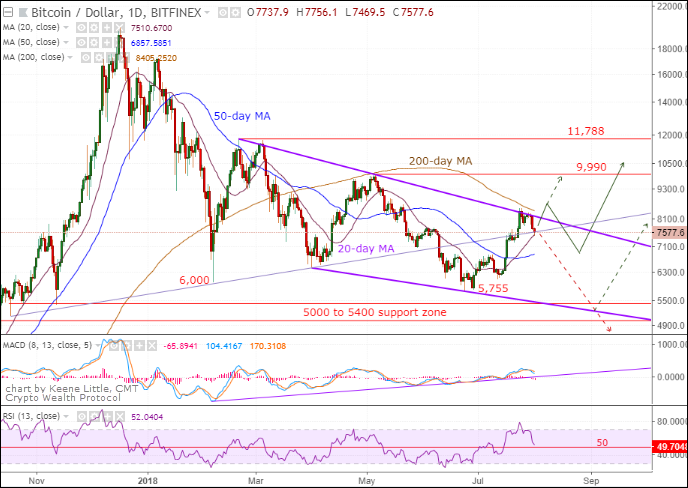 This bearish downside vulnerability for Bitcoin exists because of the price patterns for the other altcoins. Most of the other coins have not bounced nearly as strong as Bitcoin and instead look like a correction within an ongoing bear market.

For this reason I’ve been suggesting holding off on additional investments other than your normal regular monthly contributions to your portfolio, which should be without regard for price.

The bullish potential that I see for Bitcoin is for the minor pullback from the July 24th high to lead to another push higher above its 200-day moving average, near $8,400. This is depicted with the solid green lines.

As long as Bitcoin remains above $7,500 the bullish potential remains a possibility.

However, it remains difficult to reconcile the weakness in the other coins with the strength in Bitcoin. The bifurcation means we must remain cautious the market.