Is the 4 percent rule viable for retirement anymore? And if not, what should retirees do about it?

For decades, the cornerstone of retirement planning has been the 4 percent rule, which states that if you only withdraw 4 percent of your funds annually, odds are that you will have enough money to last 30 golden years.

Yet the conventional wisdom is being questioned. Two key changes have made this simple rule no longer applicable to many retirees.

The high cost of lower returns

One is diminished returns from the stock and bond markets.

The 4 percent rule was developed in the 1990s and based on historical data on stock and bond returns from the 50-year period from 1926 to 1976, when interest rates were significantly higher.

While this simple rule may have worked when stock returns were above average and interest rates high, recent studies have demonstrated this to no longer be the case.

A 2013 study by Michael Finke (and co-authors) plotted the “failure rate” of retirement accounts over 30 years at various different annual rates of withdrawal. 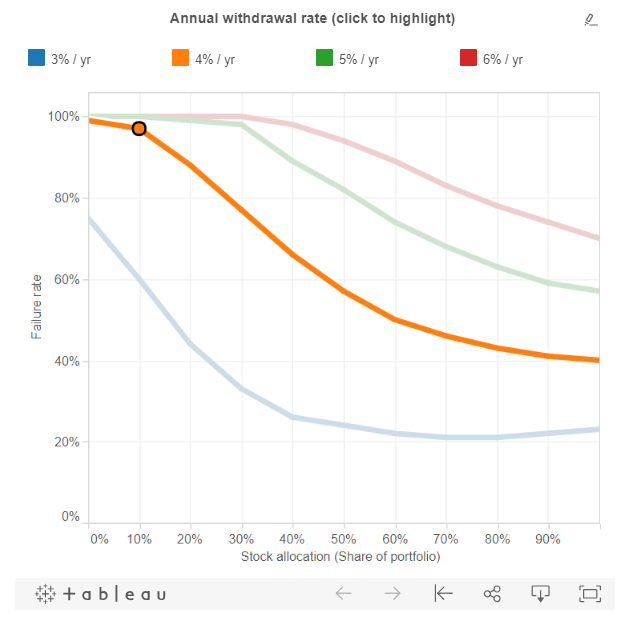 Even with a high-risk portfolio of all stocks the authors estimate that over 30 years, four out of 10 people will run out of money if they withdraw 4 percent a year.

Even worse, for those who aren’t invested entirely in stocks the odds of running out of money is 99 percent.

However, if you have a portfolio of half stocks and half cash or bonds and withdraw just 3 percent a year, then the odds of eventually running out of money are reduced to around 20 percent.

Not only are the lucrative stock market returns of the last three decades unlikely to hold up, other investments such bonds are also paying less than they have historically.

This is changing, of course, but slowly and there is not guarantee that rising interest rates are sustainable for decades.

A lower return thus requires a more prudent approach than following a the 4 percent rule.

The high cost of longevity

The other factor that has affected the 4 percent rule is increasing life expectancy.

Americans are now living longer than ever in retirement, which means their savings also need to last longer. In 1970, a 65-year-old man could expect to live 13 more years.

By 2011 that figure had reached 18 years and it has continued to rise.

Most people tend to claim Social Security starting at around 62, so it’s important for their retirement plan to last at least 30 years.

Depending on the specifics of your plan, this might mean that you find that you’re safer withdrawing 3 percent of your investment savings to ensure that it will last.

You might have enough to withdraw 5 percent, for instance. Developing your own withdrawal strategy while you are still in the working world is a far better bet than relying on the magical math of the 4 percent rule.

It’s easy to pretend that you will never get old. The demands of modern life can make it easy to push the thought of retirement out of your mind.

It’s not surprising therefore that when it comes to retirement savings, many American workers are lacking.

According to data from GoBankingRates, an estimated 42% of Americans have less than $10,000 in savings set aside for the future. Another survey by Capital One indicated that 22% of Americans aren’t contributing to a retirement fund at all

And what are their reasons for not saving? Forty-one percent stated that they were not earning enough money, and 18% said that they were counting on Social Security instead.

When managed well, Social Security can serve as a substantial income source. It keeps millions of elderly Americans out of poverty for sure.

But if you’re not careful you can end up inadvertently reducing your benefit allowance.

Here are a few mistakes that will do just that.

Mistake No 1: Not saving at low income levels

What many low income earners don’t realize is that living expenses have a tendency to rise in line with income. Even some of the biggest earners can end up broke in retirement.

Of course, someone earning $100,000 a year will have an easier time saving money than someone bringing home $30,000, but budget accordingly and you can save money for the future regardless of how much you are earning.

Mistake No. 2: Not knowing your full retirement age

Although you can start claiming benefits before reaching full retirement age, you won’t be entitled to collect the full amount based on your earnings history.

And although you’re eligible to claim from age 62, if you don’t wait until you reach full retirement (based on your year of birth) then you will be deducted around 6.67% for the first three years you file early, and a 5% reduction for each year afterwards.

Studies show that around 74% of Americans don’t know their full retirement age, but it might be a number worth knowing!

Mistake No. 3: Not fighting for raises during your career

The more money you make during your career, the higher your Social Security payments will be. Settling for a low salary could set you back financially in retirement by leaving you with a lower monthly benefit.

Mistake No. 4: Not correcting errors on records

Social Security benefits are based on your earnings, so if records are inaccurate, that can work against you. Take the time to check records and correct potential errors so that you don’t stand to lose money.

Mistake No. 5: Not working for 35 full years

Social Security benefits are calculated based on how much you earned during your 35 working years with the highest income.

For each year you were out of the workforce, you’ll have to factor in zero. Too many years with zero income can make the benefit much lower than it might have otherwise been.