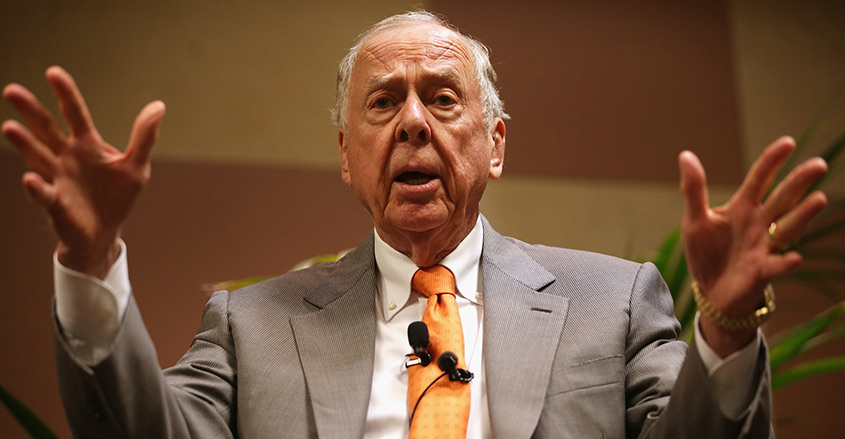 Billionaire Texas oilman T. Boone Pickens, 89, has been involved in legendary companies such as Gulf Oil, Unocal and Phillips Petroleum.

Oklahoma State University’s School of Geology and football stadium is named after him. He ran his own energy hedge fund, BP Capital Management, for 40 years.

“I have had the good luck to become a tycoon myself and want every American to have that same opportunity without going through everything I’ve had to go through,” Pickens said.

Pickens means the ups and downs of being wildcatter, speculator and more recently an advocate of solar and wind farms. Pickens’ estimated worth is $3 billion, but claims that more than $100 billion has passed through his hands over his career.

Pickens was one of the first and greatest hostile takeover artists of the seventies and eighties. In 1968 he launched a hostile takeover bid of Hugoton Production Company, which owned the rights to an enormous gas field and was 30 times the size of Mesa, his own firm.

The company was, in Pickens’ opinion, poorly run and not getting fair prices for its gas.

As happened with many of Pickens’ later takeover bids, Hugoton’s board and management rejected his initial offer of a merger. So he took a large position in Hugoton stock and began his first takeover.

Because Mesa couldn’t afford to buy 50% of Hugoton shares with cash it made an unsolicited offer to buy them with shares of its own newly created preferred stock.

Despite buying only 2% of Hugoton shares on the market, Mesa’s hostile bid drove the market value of Hugoton to $137 million from $77 million in just a few weeks.

Pickens made a fortune, his investors made fortunes, and a legend was born.

The new fund’s philosophy is based on the Pickens Plan.

Some of the tenets of the plan include using America’s natural gas supplies to help replace imported oil, upgrading the country’s electrical transmission grid, developing alternative energies, such as wind and solar, and using technology to increase energy efficiency.

The fund is indexed to the NYSE Pickens Oil Response Index, which offers exposure to companies that both produce and consume oil, gas and other fuels.

It looks for companies that are highly correlated to both short- and long-term movements in Brent Crude Oil prices. Because the fund invests in both producers and consumers, only half of the fund is allocated to the energy sector.

A quarter of the fund is invested in industrials, while the remainder is in a combination of basic materials, consumer and tech including some big bets on new battery storage technologies, such like Elon Musk’s Powerwall.

BOON, the fund’s ticker, invests in roughly 80 companies of all sizes and charges an annual expense ratio of 0.85%, a relatively high number for a passively-managed fund.

The announcement comes less than a month after Pickens announced he was closing his energy fund BP Capital because of declining health, including a series of strokes and a serious fall last year.