Benjamin Franklin said there were only two things certain in life: death and taxes.

We can’t help you on the first issue. But the second… you have options.

Aside from federal taxes, every U.S. state determines its own tax rates for income taxes, property taxes, and sales taxes.

However, don’t think that the states without income taxes are naïve – revenue is raised for the state through other taxation forms, including property taxes and sales taxes. Therefore, it would be prudent to know what those rates are before making large purchases.

Retail sales taxes are one of the more transparent ways to collect tax revenue. While graduated income tax rates and brackets are complex and confusing to many taxpayers, sales taxes are easier to understand. Consumers can see their tax burden printed directly on their receipts.

State sales taxes range from zero to 7.25%, with most states falling between 4% and 7%. In addition to state sales tax, some local jurisdictions also impose a local sales tax.

The five states with the highest state-level sales tax in the country are Indiana, Tennessee, New Jersey, Mississippi, and Rhode Island. 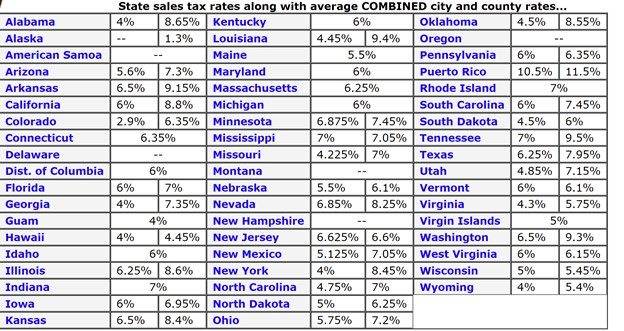 While it’s tough to avoid paying taxes, there are lawful ways to avoid paying more taxes than you need. A good accountant can help you minimize your tax bill, as can simply living in a state with lower taxes overall.