Many investors believe that real estate investment trusts (REITs) are similar to bonds and hence should be avoided during times when interest rates are rising.

However, the data simply does not support this belief. Refer to the results of a recent study shown below that spans twenty years done by REIT guru Cohen & Steers. 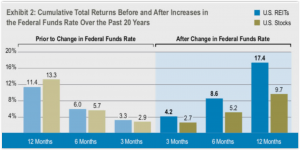 The vertical bars on the right show what U.S. REITs did relative to U.S. stocks overall after the Federal Reserve increased the Federal Funds Rate.

The chart doesn’t say “increase,” but after going through the analysis I confirmed that this is what in actuality the data shows here. Twelve months after the federal funds rate rose, REITs had appreciated over 17%. Overall, equities were up just under 10%.

Conceptually, one can postulate why a higher interest rate environment could be beneficial for REITs. Yes, higher rates increase borrowing costs. However, if the higher rates are largely a result of higher economic growth, that could offset higher debt costs.

The fact is, REITs as a whole generally only use a moderate amount of balance sheet leverage, so many of these other strengthening fundamental factors will typically outweigh the negatives of higher debt costs.

In addition to taking on positions you would expect to prosper during stages of higher interest rates and widening rate spreads, such as financials, REITs just might deserve some portfolio space just as well.