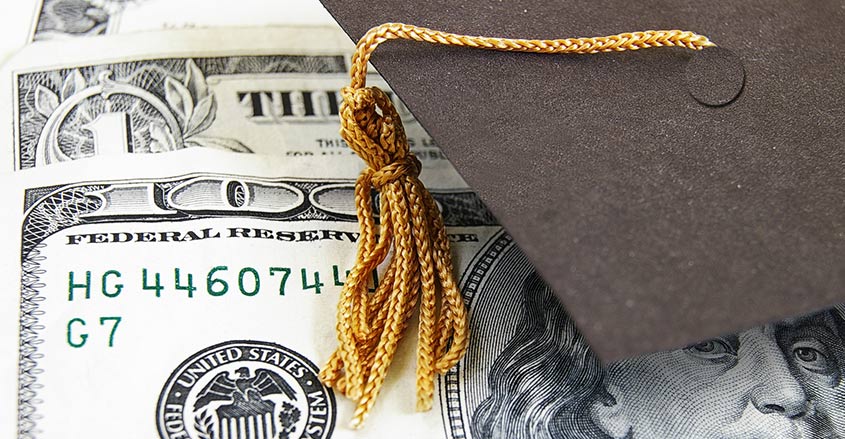 Student loan debt after retirement is increasingly a reality for many Americans.

By the year 2030, by one estimate, more four in 10 Americans will default on their student debt repayment obligations.

Student loan debt after retirement can trigger a whirlwind of consequences for the debtor.

For one thing, federal benefits such as Social Security can be withheld. Third-party collection agencies can be authorized to reclaim the debt by any legal means.

Defaulting on student loans can impact your credit score and hamper your ability to be approved for a mortgage. Worse of all, it can completely wreck your chances of living a financially stable retirement.

Even more retirees are contemplating whether to pay down their student loan obligations or save for retirement. For many, doing both is not a realistic option.

A 2017 research study conducted by the Consumer Financial Protection Bureau reveals that boomers and retirees are struggling to repay their student loans.

Moreover, the ranks of elderly age student loan defaulter are increasing at a worrying rate. The CFPB report notes that the number of people who are age 60 and over with student loan debt has increased by a factor of four over the last 15 years.

Robin Howarth, an executive researcher for the Center for Responsible Lending, believes that the retirement futures of many retirees are at stake.

Many will have to choose between paying down student loan debt or financing their retirement. “America’s older consumers do not deserve to have their proverbial golden years tarnished by heavy student debt,” said Howarth.

Paying down loans or saving?

Prioritizing between paying down a student loan debt or financing a retirement future can end up being an impossible choice for many retirees.

Paying down a student loan debt without defaulting is a steady strategy towards freedom from that debt. Especially if you have a manageable interest rate.

However, you could end up paying down your student loan debt and have no money as retirement begins. If you have a 30-year or 40-year head start, accomplishing both may be manageable.

Yet, most people nearing retirement age already live on fixed incomes. The average working salary of a boomer is about $23,000. Meanwhile, the annual standard of living expense for most working retirees ranges between $40,000 and $44,000.

Yet the only thing more difficult between paying down a student loan debt or saving for retirement is managing the consequences of default. A senior citizen defaulting on their student loan debt could utterly destroy their chances of attaining retirement.

What is student loan default?

The average monthly student loan debt payment ranges between $100 to $300. When a student loan debtor fails to make payments or makes partial payments for nine months or more, the loan is automatically in default.

What this means is that your loan information is referred to third-parties collection agencies to reclaim the loan.

One such consequence is wage garnishment. A retiree’s pension, disability benefits, Social Security benefits, and working salary can be garnished.

Or, tax refunds can be withheld. According to the United States Government Accountability Office, more than 114,000 senior citizen student loan debtors had their incomes garnished in 2015 alone.

More than 31% of boomers were forced to completely stop saving for their retirements due to student loan debt, according to AARP.

Many even have had to use their retirement savings to pay off their debt. Paying off student loan debt can hinder medical treatment.

The average retiree will spend $280,000 on medical expenses throughout retirement. Nearly one in 10 boomers gave up on regular medical treatment just to repay their student loans.

Defaulting on student loans can result in deductions of credit scores by as much as 60 points. This can result in higher interest rates to be approved for a loan, denial of mortgage applications, or rejection from a job, among other things.

Additionally, you can be sued and legally harassed by third-party collection agencies trying to reclaim the loan.

We all want the best for our children, grandchildren, and loved ones. However, life is hard.

It may be more realistic to consider what is in the best interests of everyone. Only about 20% of senior citizen student loan debtors are paying off their own student loans. Yet more than 70% were paying off student loans for their grandchildren or are co-signees for tuition loans.

“Unfortunately, helping your kids go to college by going into debt yourself works against your own self-interest and your ability to retire,” said Barsch.

“The reality is that students have choices about which college to attend. … Students can also get scholarships. But there are no scholarships for retirement,” added Barsch.

Never assume that as a co-signer, your relative will repay the debt.

Announce terms clearly and get it in writing if you have to. Otherwise, your retirement could be imperiled by your own selfless act of love and earnest intentions.

For example, an income-driven repayment plan can customize repayment terms based on your existing income levels. Apply for a loan forgiveness or cancellation option. A student loan can be cancelled via a student loan discharge due to a debilitating or life-threatening condition.

Reassess your monthly budgets. Discuss the future viability of any existing investments with a financial advisor.

Whatever you do, don’t just ignore the problem. Crippling student loan debts during your retirement years may make them more difficult but doesn’t necessarily have to derail them either.