It might be in your best interests, financially and emotionally, to never retire.

Before you object too much, consider a few things.

No one is suggesting that you haven’t earned your pension benefits or the right to relax and take it easy. If you have spent a lifetime working hard with minimal breaks or vacation, then of course you deserve a break.

Still, a post-retirement life must be methodically planned out.

Your savings must be unerringly calculated to last decades in post-retirement. Otherwise you might find yourself in your 70s, 80s, or 90s with depleted savings and facing an ageist, unforgiving world and job market.

Retirement is not like those finance commercials featuring retirees golfing, hiking and pursuing recreational pursuits without a care in the world. You’ll face the same cost of living struggles post-retirement as you did in working life, if not more, as you age.

Yet you also could work part-time, on your own terms, as long as you can. That would stave off depleting your savings by months, years or throughout retirement.

Staying engaged in life and doing things you enjoy keeps the body and mind sharp. Finding things to do and staying physically active is just as important as passively keeping medical checkups.

That’s because after 65 the health and mental fitness of the human body rapidly declines without regular exercise and stimulation. Many retirees end up using significant portions of post-retirement savings for medical reasons that are largely avoidable.

Even if you could travel worldwide post-retirement, which is an expensive undertaking, at some point you will come home. What to do after? What will you do with your time?

Boredom, listlessness and even depression could become the bane of your retirement plans.

Instead, you could volunteer, become a mentor, start a home-based business or pursue a dream project. The things that you can do post-retirement are limited only by your pre-retirement skills and how you want to apply them.

Imagine retiring. Then what?

Let’s start with money. Will you even have enough money to finance the retirement lifestyle you want?

A good reason to never retire, or perhaps semi-retire, is that fact that most retirees never really save enough for retirement.

Financial consultants say that saving $1 million for retirement is a good rule of thumb.

Your standard of living in retirement depends on how much you save, where you live and how much you budget. According to GoBankingRates.com, a retiree living in Mississippi can live off of less than $1 million for almost 26 years. But that same money only goes 12 years in Hawaii.

While $1 million sounds like a reasonable amount to save for retirement, most Americans never, ever, come close to that amount.

A little over 10% of Americans barely save less than a third of a million dollars for retirement. Most have virtually no savings at all and live check to check.

Research by GoBankingRates.com reveals that 1-in-3 Americans have absolutely nothing saved for retirement.

About 33% of Americans have no absolutely no money whatsoever saved for retirement.

Only 13% of Americans ever save $300,00 or better for their future retirement needs. Those numbers only get graver when the percentages are broken down by gender.

It is a misconception that most people get to retire when they want and on their own terms.

More than 55% of Americans are forced to retire earlier than expected for one reason or another. Usually because of a surprise medical problem or an unexpected job loss.

Post-retirement income rates for the average person, as well as supplemental sources of income, can also necessitate the need to work throughout retirement.

Keep in mind that the average annual Social Security payout is about $16,100.

Over 71% said that if they lost their work income they would downsize drastically so that they could live off of Social Security.

By some estimates, over 36% of Baby Boomers are completely reliant on Social Security.

Going back to work in retirement

Unexpected or forced retirements can force people with no money, or those in the pre-planning stages of retirement, to return to the workforce.

People aged 55 and over will become a major demographic in the American workforce by the year 2024. 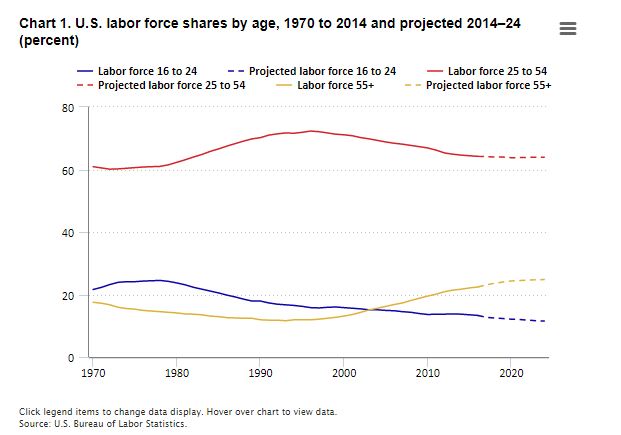 According to the U.S. Bureau of Labor Statistics, more than 164 million Americans will be a part of the American workforce by 2024.

Moreover, these emerging demographics of pre-elderly and elderly workers are increasing at a rate unseen before.

Surprisingly, workers aged 75 and older will continually add to the American workforce by an annual rate of 6.4% from 2014 to 2024.

The American workforce will get older and older with people working well into their 70s and beyond. This is happening, and will continue to happen for years to come, because people can’t retire on their own terms. If at all.

Unless you are of the 13% of Americans who have saved $300,000 for retirement, it might be in your best interests to keep working. Even if on a part-time basis. Doing so will only stave off the potential depletion of your savings.

Barely 40% of Baby Boomers have taken the time to calculate how much money they will need to save to last them throughout retirement.

Of that number, one-third of Baby Boomers never even consider including their future health care expenses into their retirement calculations.

Another reason why you should consider never retiring is that, health-wise, you may just not be able to afford it.

A recent Fidelity research report states that the average retiree can expect to pay more than $280,000 in healthcare costs throughout retirement.

The average age of retirement for a man is 64, while for a woman it is 62. Accordingly, a 65-year-old male can expect to pay $133,000 for post-retirement health care expenses. 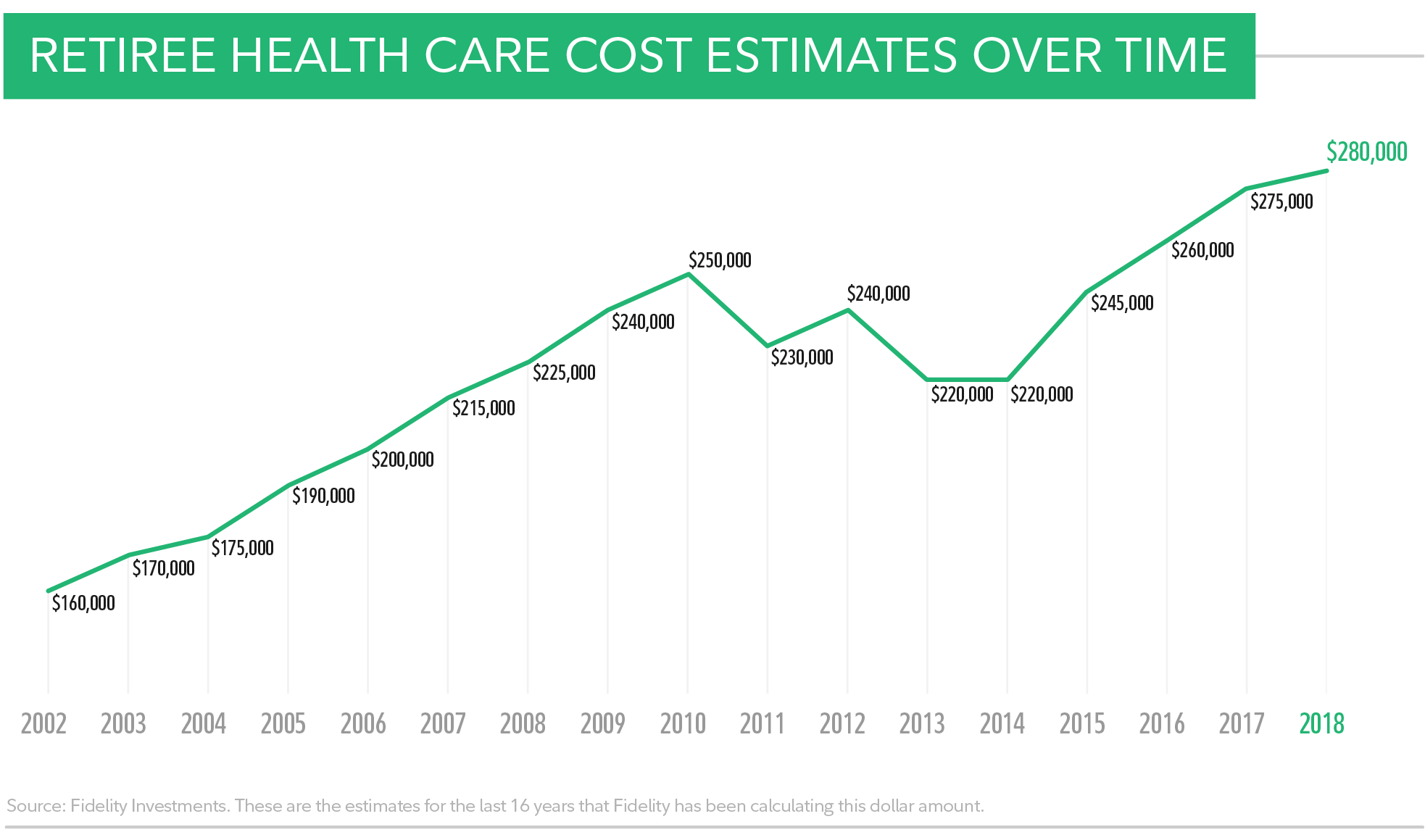 Over 36% of retirees expect to pay over $500 or more in monthly health insurance premiums. About 49% expect to pay such costs out of their personal savings.

Such costs can be significantly more before Medicaid eligibility kicks in.

Unless you have saved a lot of money, consult a financial advisor and take into account your medical needs for at least two decades post-retirement. It may not be feasible for you to fully retire.

Another point to take into account is that post-retirement life, for some people, can be boring and emotionally draining without a life focus.

Most new retirees, if they can afford it, embark on personal adventures after exiting the workforce. Like going on a dream trip or extended vacation. They may clean up their homes and various properties in earnest and begin downsizing.

Some start spending extended time with family. Or begin taking up gardening or other personal hobbies as major life-encompassing activity.

Some retirees are content to hang out at home as much as possible. Again, if you want to retire after a long working life, that is understandable.

People are living much longer lifespans than in previous decades. We’ve discussed how important it is to plan out post-retirement finances.

It is also just as important to plan out post-retirement activities.

If you tell people that you are retired, what is that supposed to mean? What will you do with your time?

You could work part-time to continue supplementing your income. There are always freelance and independent contractor work opportunities available in the so-called gig economy.

Or you could volunteer, teach or mentor. Perhaps you could start a home-based business. You could become a consultant.

The things that you can do with your time post-retirement are only limited by enthusiasm and imagination.

Whatever you decide to do, think about how your post-retirement activities can keep you busy throughout retirement. Plan it out as meticulously as your finances.

Whether in working life, or in retirement, a human being must have a purpose. Years of idleness in advancing age will have detrimental medical effects.

According to the Institute of Economic Affairs, being retired could result in the incremental decline of mental and physical health. Retirement can also cause depression in people who abruptly find themselves with no set life purpose after a lifetime of working.

If you do retire, always stay active. Keep your mind and body active. You shouldn’t sit at home, or at the beach warbling Jimmy Buffet tunes, forever.

Retirement is not the end

Never retiring, or semi retiring, can extend your finances, keep you healthy and give you a focus for existence.

No one is denying your right to retire.

Still, retiring is all about the exacting calculations of personal savings to last throughout retirement. Hopefully with the help of a financial analyst or professional. Or you may find yourself unretiring not long after retiring.

It might help you to not view retirement as an endpoint. Like a vacation or a hobby jaunt. The fascination with vacations and hobby maintenance will end at some point. Such activities cannot fill your post-retirement life with meaning.

The meaning of your retirement is up to you to decide. If you can afford it.

Retirement is not an endpoint. It’s a continuing journey of life. A new chapter.

Coincidentally, if you are planning to travel around the world for a year after retirement, the average annual cost to do so begins at $24,000 and up.