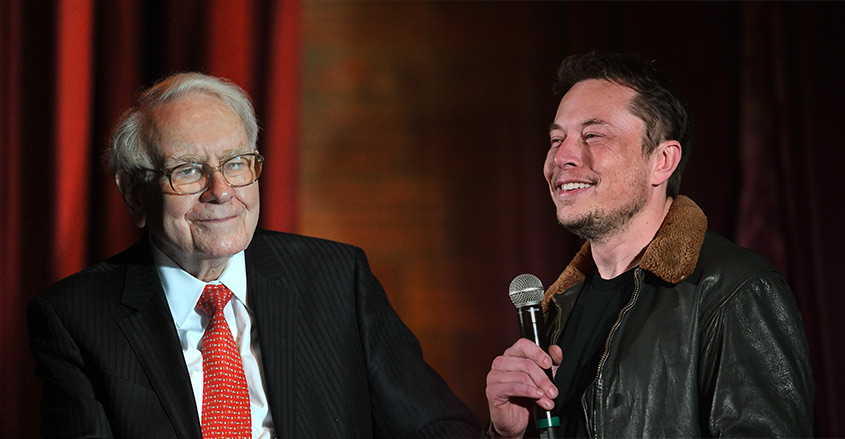 Nearly 42,000 Berkshire Hathaway shareholders last weekend made the pilgrimage to Omaha, Nebraska to hear Warren Buffett and his longtime business partner Charlie Munger answer six hours of questions and answers at an annual meeting of shareholders.

Buffett, among the world’s wealthiest people, had as usual many homespun nuggets of investing wisdom to offer.

But it was a short commentary on mercurial Tesla Motors founder Elon Musk that really sums up his philosophy of investing.

Musk is known for attacking entire industries he finds sleepy and ripe for change, first banking with PayPal, then autos with Tesla, and forcing change.

Disruption is an interesting business, Buffett admits, but it’s not the same as a long-run winning investment.

Buffett has long defined a powerful stock as one that has a “moat,” a brand built around a product so deep that people buy the product unconsciously and look upon competitors as less.

And the business has to be dead simple to run.

— The Conservative Professor (@CnservativeProf) May 5, 2018

The famous example is Coke, a company in Berkshire has held shares for decades.

Buffett once said Coke is so simple — sugar, water, and flavoring in a can — that “a ham sandwich” could run the company.

“Certainly you should be working on improving your own moat and defending your own moat all the time. And Elon may turn things upside down in some areas. I don’t think he’d want to take us on in candy. And we’ve got some other businesses that wouldn’t be so easy,” Buffett said.

“You can look at something like [kids’ clothing line] Garanimals. It won’t be technology that takes away the business in Garanimals — maybe something else that catches the young kids’ fantasy or something. But there are some pretty good moats around.”

Yet he does understand the Apple iPhone as a brand with a real moat. In the first quarter, Berkshire acquired nearly 70 million shares of Apple.

“We’re betting on the success of Apple products like the iPhone, and I see characteristics in that that make me think it’s extraordinary,” Buffett said.

“And I didn’t go into Apple because it was a tech stock in the least. I went into Apple because I came to certain conclusions about both the intelligence with the capital they deploy but more important the value of an ecosystem and how permanent that ecosystem could be.

“And what the threats were to it and a whole bunch of things. And I don’t think that required me to take apart an iPhone or something and figure out what all the components were.

“It’s much more the nature of consumer behavior, and some things strike me as having a lot more permanence than others.”

He continued, offering this simple advice for anyone seeking to replicate his success as an investor.

“What we do is not a complicated business. It’s got to be a disciplined business, but it does not require a super high IQ or anything of the sort. And there are a few fundamentals that are incredibly important.

“And you do have to understand accounting, and it helps to get out and talk to consumers and start thinking like a consumer in many ways and all of that, but it just doesn’t require advanced learning.”

Don’t let the headlines fool you into thinking that investing is a mistake, Buffett told the crowd. The future is bright, and investors will benefit from putting cash to work today.

“People are going to be living better 10, 20, 50 years from now, and I don’t think that’s something that can be stopped, absent weapons of mass destruction.”