Many financial markets around the world are at or near all-time high levels. Is there any region of the world where there might a nice contrarian opportunity?

One might be the emerging markets. Emerging market countries are defined as those transitioning from a lower income, lesser developed state that is integrating into the more mature global economy.

Refer to the chart below showing the relative equity performance of emerging markets (EM) versus developed markets (DM) since 1969. 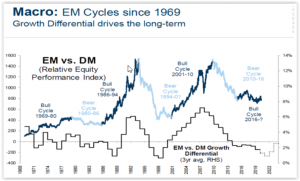 As seen in the chart, emerging markets went through a sharp underperformance period relative to developed markets from around 2010 through 2015.

From 2016 to the present, however, the relative performance has generally been in a neutral mode, and just may be starting to reverse and inflect upward going forward.

As the lower line shows, this underperformance has been well founded. This line shows the earnings differential of emerging markets versus developed markets, and it has tracked with the above relative price performance chart fairly tightly.

Earnings growth for emerging market countries simply has been less than earnings growth for the more mature companies over the 2010-2015 mentioned above, and has more or less stabilized since then, notwithstanding the COVID-19 pandemic.

If rising commodity prices and a falling dollar show some sustainability, however, this relative profit picture may be due to reverse as we rebound from the pandemic.

Indeed, current valuation levels for emerging markets look enticingly attractive at the present time. While the S&P 500 sports a forward price/earnings of around 24X, the overall emerging market is at 16X.

The price/book ratio on the S&P 500 is at a hefty 4.6x presently, versus only 2.1X for emerging markets.

Most analysts have earnings per share for U.S. companies growing at 15% in 2022, with emerging market firms expected to grow at least this much if not 1% to 2% higher as the world rebounds from COVID-19.

If you look at some of the individual developing countries, anticipated year-over-year profit growth for 2022 looks extremely robust: Philippines +26%, South Korea +25%, Indonesia +23%, India and Thailand +20%.

In summary, the valuation per unit of expected growth for emerging markets does present some interesting opportunities.

At a time when we have pretty elevated valuation levels on many of the more developed markets, investors willing to take a more contrarian route by initiating or increasing their emerging market allocation may be happy campers a year or two out.