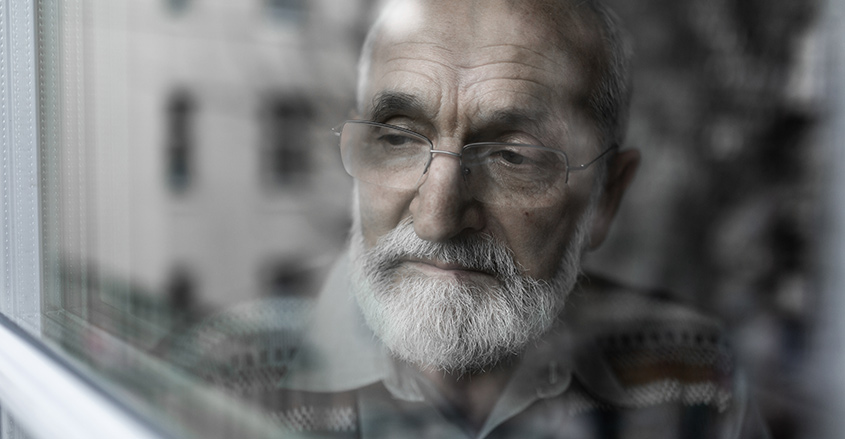 A new report warns that growing social isolation and loneliness among America’s seniors citizens is approaching crisis levels. The study, conducted by the National Academies of Sciences, Engineering and Medicine, concluded that if left unchecked, loneliness and depression can have severe detrimental health ramifications for older Americans.

Conclusive evidence from four decades of research reveals that risks associated with loneliness include the following:

Isolation, is one of the biggest health threats to elderly Americans that is frequently overlooked. As they grow older, many individuals over 70 tend to retreat into solitude and seclusion.

There are several factors responsible for the changes as people grow older, some of them inescapable. Close friends and relatives with whom seniors have maintained meaningful relationships may die and, as a result, social circles become more limited. Many who are 70 and older will lose a long-time spouse, which can create feelings of loneliness, despair and emotional isolation.

In addition, as people age their mobility decreases due to physical limitations or mental impairments, as well as the fact that they can no longer drive. Many seniors associate the inability to drive a car as a terminal loss of their freedom. This unfortunate but inexorable condition, exacerbates profoundly their feelings of aloneness as the ability to freely visit with friends and family is suddenly removed.

Dramatically changed living arrangements for many seniors means living alone. In conjunction with increased disabilities and impairments, that leads to increasing rates of withdrawal and loneliness.

Recent research indicates that of those 65 years or older, 18% live alone and 43% reported feeling lonely regularly. One study found that the rate of depression for elderly Americans who live in assisted or residential care facilities has exceeded 45%.

Multiple studies have definitively shown that isolation among seniors can have a deleterious impact on health. One study found that seniors who are isolated have a 59% higher risk of physical and mental decline and a 45% increased risk of death.

According to Dr. John Cacioppo, a neuroscientist who has conducted research on social isolation among seniors for the past 30 years, feelings of loneliness are demonstrably linked to poor cognitive performance, increased cognitive impairment and a higher risk of dementia.

There are other significant health risks. Lonely seniors are more prone to serious illnesses such as chronic lung disease, rheumatoid arthritis, and significantly impaired mobility. Additionally, feelings of despair and withdrawal can cause seniors to engage in excessive alcohol consumption, overeating and smoking.

Prolonged isolation and feelings of loneliness can have a detrimental impact on heart health in astonishing ways. Researchers in Sweden discovered that coronary bypass surgery patients who described themselves as lonely were 2.6 times more likely to die within 30 days after an operation than those patients who said they were not lonely.

Even more telling, the researchers found that five years after surgery the risk of death for lonely patients was still 1.8 times higher.

There are a number of steps family and friends can take to mitigate the feelings of loneliness among seniors. One of the easiest solutions is to offer to drive the elderly. This simple act of kindness can have a profound impact on alleviating feelings of isolation. It allows seniors to leave the cloistered confines of their home and visit with friends, families and engage in community activities and/or pursue their own activities and hobbies.

Families should encourage their elderly parents to get involved in community activities or volunteer. There are a plethora of opportunities available for seniors to perform a meaningful role in donating their time and experience across a range of activities.

These could include working at local schools, sports and other non-profit organizations. Volunteering and becoming integrated within their local communities can give older Americans a sense of purpose and fulfillment.

An important factor in breaking the unhealthy cycle of loneliness and isolation to which seniors are prone is for family and friends to get in the habit of visiting. Being able to see family members on a more frequent basis, other than exclusively on holidays, could go a long way toward ameliorating feelings of aloneness, solitude and isolation.

Frequent visits — even those of short durations — are welcomed by the elderly. They feel that their children and friends haven’t abandoned them as they grow older and less mobile. If a personal visit is not possible, a phone call on a regular basis lets elderly parent(s) feel that the younger generation hasn’t cast them aside.

Since depression encourages a sedentary lifestyle among the elderly, this condition of dormancy can create significant health problems. There have been numerous studies that have found an incontrovertible link between early death and immobility or a lack of exercise, even something as simple as walking every day.

The resulting negative impact on health is exacerbated with seniors, because many find it difficult to get out of their living quarters because of reduced mobility or a lack of available resources that would provide encouragement for elders to become active instead of remaining immobile.

There are a plethora of benefits for exercising and breaking the cycle of lethargy. However, many seniors are misinformed about what constitutes exercise. Older Americans need to disabuse themselves of the idea that to be effective and reap the benefits of exercise, daily workouts must be strenuous.

The evidence suggests otherwise. A daily regimen of walking only 30 minutes a day has profound beneficial effects for mental and physical health.