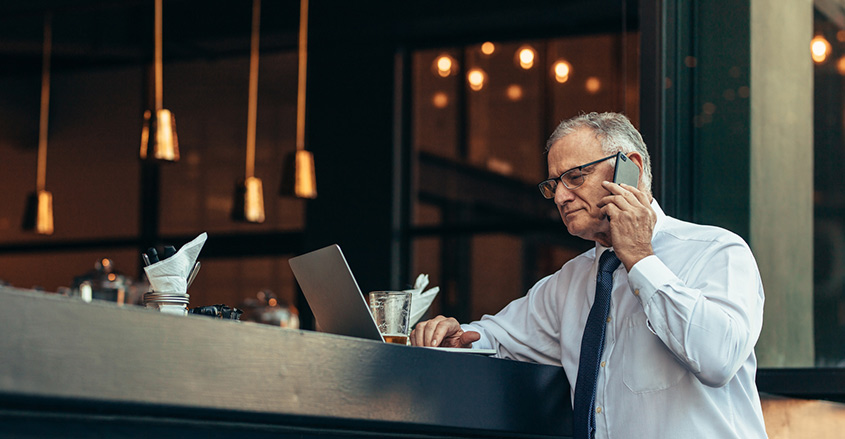 Many baby boomers are not yet ready to retire. Enter phased retirement, the concept of quitting work in stages.

Contrary to popular belief, the retirement process can be extremely stressful, depressing and frustrating. One has to go suddenly from a lifetime of work to having a lot of free time.

For many, too, a job or career is an identity. It’s hard to give that up.

According to a recent survey conducted by the Transamerica Center for Retirement Studies, many boomers plan to keep working.

More than 41% of American workers plan to work past the age of 65. Well over 13% have absolutely no plans to retire at all.

Along with maintaining an identity and a focus in life, most people don’t look forward to retiring because bills have to be paid.

Many older Americans, especially retirees, live on fixed incomes. Most American households that are led by senior citizens barely have $60,000 in savings.

The average income of retirees who reenter the workforce is barely $23,000. Meanwhile, the average annual standard of living requirement for most retirees is about $44,000 a year.

There is an option that can allow near-retirees to stay in the workforce longer. Phased retirement, also known as flexible retirement, is one method.

Phased retirement allows older workers to stay in the workforce at a modified salary, part-time, and serve as experience-rich mentors.

Phased retirement also benefits employers who need to train a new generation of young, unskilled, and inexperienced workers primed to replace the legions of boomers set to retire in the coming decades.

What is phased retirement?

Many employers allow phased retirement employees to draw upon their retirement benefits as they adjust to their new status. The term, conditions, and operational make-up of phased retirement working responsibilities differs from company to company.

Most phased retirement employees can access retirement benefits if they work a minimum of 20-hours a week, depending on the employer.

Phased retirement working can help retirees stave off the end of work for a few months to a few years.

This aging trend will continue until 2030 at least.

In the coming decades, a literal tsunami wave of retirement-related employee turnover will occur in every strata of American industry.

Because of the baby boomer retirement exodus in the coming decades, over 31 million jobs will become open by 2020. More than 24 million new jobs will be created as well.

Meanwhile, there will be too many unskilled young workers to fill up vacant positions left by retiring skilled labor. By some estimates, more than 5 million positions will lack immediate replacements of skilled labor in just a few years.

Professor Linda Duxbury, who teaches at the Sprott School of Business at Carleton University in Ontario, Canada, predicts that employers will scramble to replace experienced and knowledgeable employees.

“These demographic changes will have profound impacts on employers as they enter a ‘sellers’ market where there are fewer employees with the necessary skills than there are good jobs,” Duxbury says.

David DeLong, Ph.D., the president of Smart Workforce Strategies, in Concord, Massachusetts, believes that employers need to prepare now for the inevitable exodus of talent and experience that will disappear along with retiring Baby Boomers.

“There is little question that many experienced workers will be leaving their jobs in the next decade. And that giant sucking sound you will hear is all the knowledge being drained out of organizations by retirement and other forms of turnover,” DeLong says.

Phased retirement may be the best tool for businesses and employers to prepare for the talent and experience drain inherent with mass retirements and turnover.

According to recent report from the U.S. Government Accountability Office, phased retirement has many benefits for employers facing an influx of untrained labor.

With phased retirement initiatives, employers can use skilled and experienced older workers to train their younger, eventual replacements. This way, employers don’t have to deal with accommodating masses of unskilled labor all at once.

Also, employers can begin to project additional workforce needs for the future.

Retirement age workers get to keep working, even with reduced pay or hours. They may delay Social Security benefits a little longer, which will increase benefits later.

Older workers also get to stay mentally and physically engaged as well.

For one thing, most companies require retirees to transition from full-time worker to full-time retiree to receive benefits. Young trainee employees may sue to work part-time and draw benefits like phased retirees.

Phased, part-time employees can cause management logistic headaches. Also, employers may not like the idea of paying full or partial retirement benefits to phased employees working part-time and contributing half of what they did before.

Employees can treat phased retirees as mentors and work-related trainers, not as full-time employees. They work for reduced hours and pay, which can’t help their standard of living needs.

That is, their usefulness will end when enough of their younger replacements are sufficiently trained.

Prepping for the future

If you are being phased into retirement, you have some leverage. Network for future work opportunities. Your experience and knowledge are invaluable relative to a legion of untrained replacements.

Make sure any retirement or pension benefits released to you are calculated and saved against your future financial needs. Use this time to plan whether you will reenter the workforce or fully retire.

If phased retirement is going to happen, use it to retire on your own terms, instead of letting an employer take all the benefits.