Reeling from the effects of public outrage over abuse of its customers private data, the stock of Facebook, once the the golden boy of Wall Street, has taken a beating.

Facebook’s share price is down 15% since mid-March, leading a broad exodus from new economy stocks.

What effect will the fallout from the data harvesting scandal have on the long-term fortunes of the company?

At present, no one can say for sure.

Facebook CEO Mark Zuckerberg’s inexplicably belated response was lackluster and clearly inadequate for the CEO of a multi-billion-dollar public company.

When he finally came out of hiding to address the burgeoning scandal, he did shareholders no favors by saying that his company should be regulated.

This is wishful thinking. Facebook’s entire business model revolves around selling its users private data to third parties who then target specific demographics with ads.

Zuckerberg comments have done little to quell public furor. Although many analysts predict that the current crisis will have limited impact on the company’s share price, privacy concerns could prompt intrusive regulations. 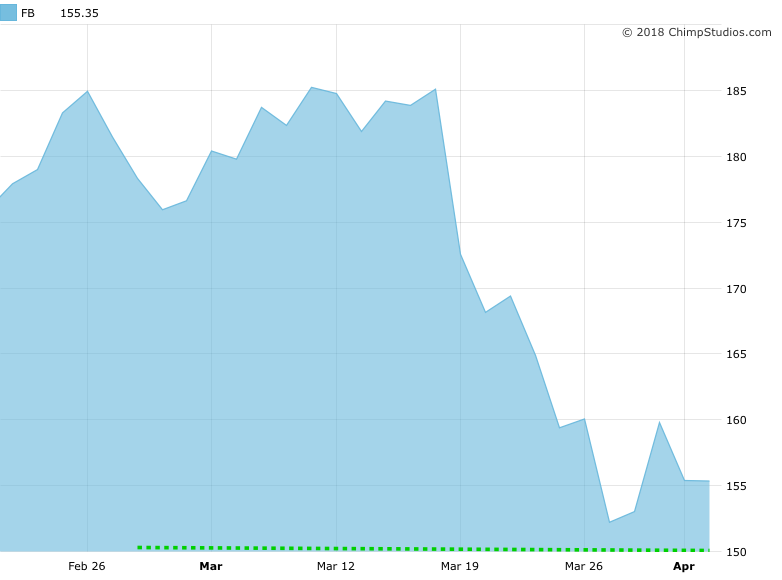 Some analysts argue that the outcry over Facebook’s data mining abuses will not affect the fundamentals of the company, which appear strong.

Facebook’s return on equity, its net income, cash flow and enviable margins all make it a sound investment.

However, such an analysis assumes that Facebook’s current user base will not decline substantially from current levels.

This is a tenuous assumption. Many long-term users are unaware of the extent to which Facebook profits handsomely by disclosing their private information to undisclosed third parties.

This analysis also does not address the almost-certain regulatory response due to a lack of privacy safeguards, inadequate disclosure and surreptitious use of customer data.

Additionally, Facebook is politically vulnerable. There is a perception of callous disregard for their users’ privacy following the scandal over Russia’s interference in the 2016 presidential election.

Congress has summoned Zuckerberg to testify. The ramifications of his testimony remain unclear.

If Facebook agrees to eliminate all political advertising and data scraping for political clients, that alone would not address the fundamental and unavoidable quandary — many people don’t want to be treated as guinea pigs for corporations.

The risk for shareholders is that there is no easy or viable solution that remedies the problems that led to the current public backlash.

Additionally, educators and social scientists have raised concerns about the negative effects of excessive use of the platform, particularly by young people.

Despite all the unknown variables that might impact Facebook’s future, one thing is certain: There is no more “business as usual” for the social media pioneer.