Bank of America investment strategists are now calling the rise and fall of Bitcoin in late 2017 and early 2018 “one of the greatest asset price bubbles in history.”

Merrill chief investment strategist Michael Hartnett may have inadvertently called the bottom, posting his research note on on April 8.

Bank of America nevertheless is calling Bitcoin and cryptocurrency in general a bubble that is in the midst of popping.

April 10 was a bad day for cryptocurrencies across the board. The world’s second largest cryptocurrency value trading market by cap, Ethereum, declined by 3.1%.

Bank of America’s report even published a Bitcoin investment mania chart comparing the crypto coin with various financial bubbles of the past. 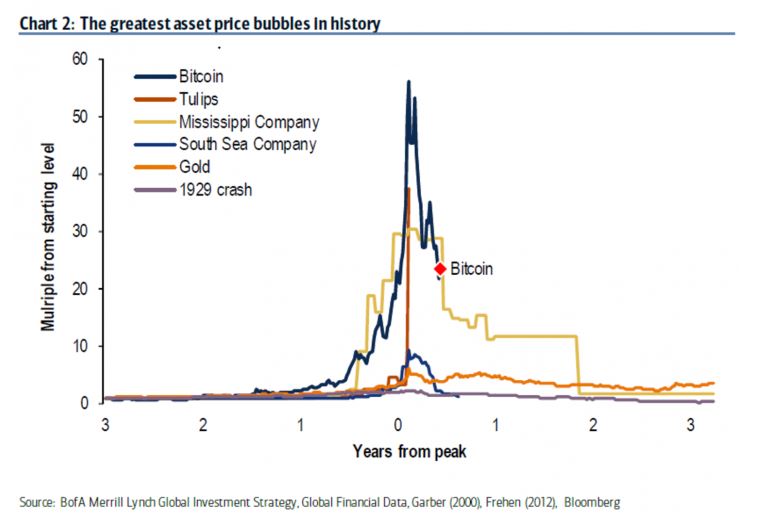 The report’s financial mania chart compared Bitcoin mania to the Mississippi Company and South Sea Company in the 18th century.

The Mississippi Company hyped French colony land available for homesteading that was divorced from reality. It may be the earliest modern example of an economic bubble.

Britain’s South Sea Company stock precipitated a financial bubble and market crash at a time when the country virtually controlled the world.

There were also a comparison to the U.S. gold rush, which benefitted a few wealthy individuals and companies and left countless prospectors destitute.

Bitcoin’s closest analogue to a past economic bubble was the Dutch tulip bubble of 1637, according to the report.

Due to Bitcoin’s rapid asset appreciation growth, it’s trading value rose over 60 times in the past three years. Before the Dutch tulip bubble burst the value of otherwise ordinary flower bulbs rose over 40 times.

It’s worth noting that Bank of America might know a thing or two about bubbles. The bank itself has come within inches of being closed by past banking crises, notably during the 2008 debacle.

Financial rescue often took panicked calls to taxpayers for help to stave off shutdowns due to overextended lending and poor management choices at the top. Tens of billions in penalties had to be repaid, costing shareholders.

Bubbles are, after all, the result of many small human decisions made worse by big decisions from those who lead our institutions.