Is gold finally back? The precious metal hit $1,889 back in the aftermath of the mortgage crisis, roughly a decade ago. Massive dollar printing was deemed the driver then.

Some financial institutions theorize that gold may continue to rise in value. Citigroup analysts believe that the price of could hit $1,600 an ounce within a year, especially if the cost of  borrowing drops below zero.

If the world tips into recession, another enormous run of dollar printing could follow and push gold through the previous record high.

The rise of gold can be connected to Trump’s trade war, the recent military tensions between the United States and Iran, market fears of negative-yield bonds, central banks decisions to come, and various other geopolitical issues. 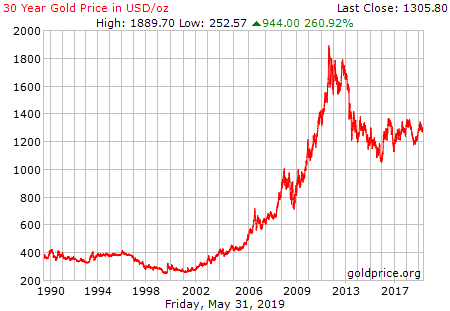 Keith Bliss, the senior vice president and head of investment banking at Cuttone and Company, nevertheless believes that gold is now “overbought” and that investors should exercise caution.

“I think gold may give you a momentary trade for a month or two, but over the history of asset markets, gold has not been a very good performer relative to equities,” said Bliss.

Meanwhile, gold isn’t even the most valuable metal on Earth. At the time of this writing, an ounce of gold had a value of $1,408 against palladium’s $1,507 an ounce.

In early December 2018, palladium surpassed gold as the most precious metal on Earth for the first time in almost two decades. At that time, an ounce of palladium had a value of $1,263 an ounce against gold’s $1,237 an ounce.

Palladium is a silvery-white byproduct metal that is made via the refinement of other metals such as platinum and nickel. It has a variety of uses but is mainly used in catalytic converters to scrub automobile exhaust.

Palladium is so valuable that thieves are actually stealing catalytic converters from the undercarriages of cars.

However, market analysts are taking note of gold’s steady rise in value. It may yet reclaim the title of the world’s most precious metal.