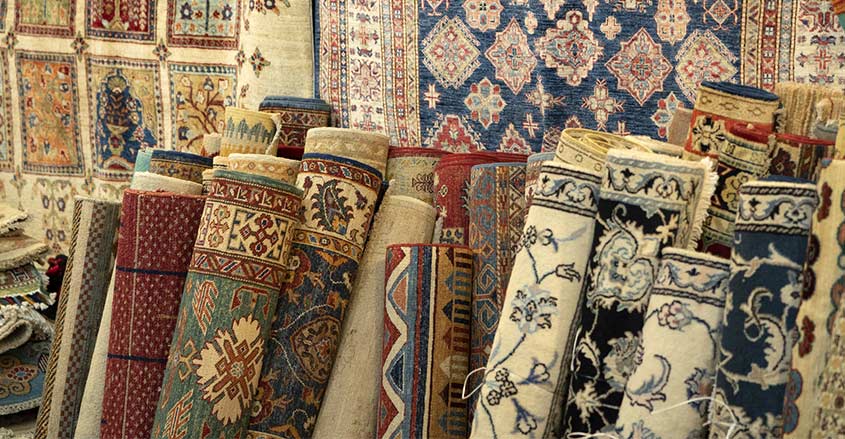 Antique rugs, also known by the outdated term “oriental rug,” are truly pieces of art that you can own.

An antique rug is a representation of the culture of a peoples or society through the craft of rug weaving.

The hand-knitting, weaving techniques, dye colors, and symbolism represented on an antique rug tells you a lot about the person who created it and their culture. Many are bought as family heirlooms or investment pieces.

The Pazyryk carpet, which may be Persian or Armenian in origin, was found in a Siberian cave in 1949. It is believed to be over 2,500 years old and is displayed in a St. Petersburg, Moscow museum.

This rug is priceless. However, there are many antique rugs that have been sold at auction for lesser, though still very impressive, amounts.

18th century French artist Pierre-Josse Perrot incorporated the French coat of arms in the design. The Savonnerie factory made European versions of oriental rugs to save import costs. Three exact copies were made for King Louis XV’s dining room in the mid-1700s. This one sold for $4.4 million at Christie’s New York in November 2000.

This golden-cream hued rug was made sometime in the early 1600s during the empire of Shah Abbas of Persia (Iran). One of the more notable owners of this rug was 20th century tobacco heiress Doris Duke. It sold for $4.45 million at Christie’s New York in June 2008. Or, about $107,500 a square foot.

This rug has a stunningly chrome-like aesthetic appearance. It was commissioned by the Maharajah of Baroda (India) in the mid-19th century. It was woven with deer hide strands and silk, knotted with a million Basra seed pearls  and miniature precious gems in silver and gold foil. In March 2009 it sold for $5.54 million at Sotheby’s Doha.

This rug was created in Northern India sometime in the early 18th century. The design features a symmetrical latticework of innumerable flowers symbols around 12-point star designs. It was once owned by Cornelius Vanderbilt II, the railroad robber baron. In October 2013, it sold for $7.7 million at Christies’ London.

Comtesse de Behague was a noted 20th century French art collector. This carpet was made in the mid-17th century and features similarities to the Kirman “vase” design or Iranian flower-like motif. The design is actually an early form of the “herati” pattern. It sold for $9.6 million at Christie’s London in April 2010.

History’s most valuable antique rug was once owned by 19th century billionaire industrialist William Andrews Clark, Sr. This Persian carpet features sickle leaf vase symbols, or flower motifs, with a red backdrop. It is of a rare design and was made in the early 17th century. It sold for $33.7 million at Sotheby’s New York in June 2013.