Biotech and pharmaceutical stocks have been in the spotlight a great deal over the last few quarters. The race to find a vaccine has produced a number of winners and losers as results for trials were announced.

The most recent winner appears to be Pfizer (PFE). The company announced trial results showing that 90% of those given the vaccine were protected from the COVID-19 virus.

One biotech company that is working with a couple of other companies on a vaccine and treatments is Amgen (AMGN). The company has partnered with Eli Lilly on their antibody therapy and it is working with Adaptive on both treatment and preventive drugs for the virus.

Despite its participation in the COVID-19 treatment and vaccine efforts, Amgen saw its stock slide in the four months.

It fell from the $260 area in early July to a low of $210.28 in the final week of October. The stock has since reversed and appears ready to resume its long-term upward trend.

Looking at the weekly chart we see a trend channel that has formed over the last few years. The lows from mid-2019 connect to form the lower rail and while the stock’s recent decline took it below that trend line, it closed the week right on it.

The only other time the stock fell below that trend line was during the market meltdown in March. We also see how the highs from last December and this past July connect with a parallel line. 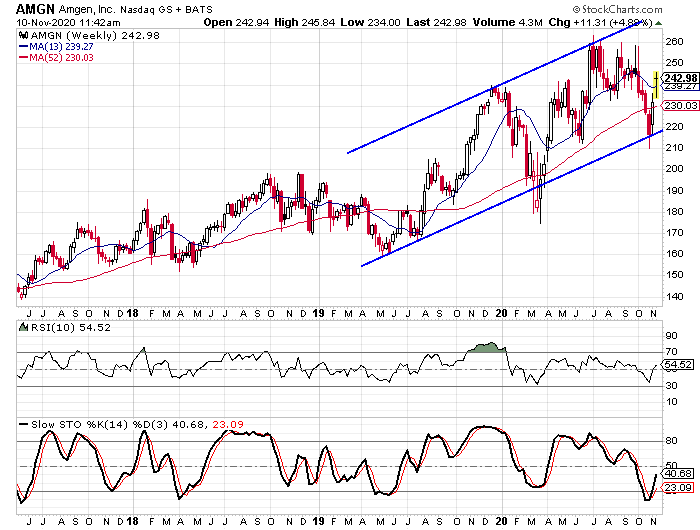 Another factor that got my attention on Amgen’s chart was how the weekly stochastic indicators made a bullish crossover in the last few weeks.

In the past, when the stock has become oversold and the indicators have made a bullish crossover, we have seen extended rallies from Amgen. The rallies have produced gains between 23% and 27%. The low in March didn’t cause the indicators to reach oversold territory, but the stock rallied over 35% in two short months.

While I like what is going on with the chart of Amgen, the reason it was on my radar in the first place was due to the fundamentals. The company has been able to grow earnings and revenue at a solid pace in recent years, but where the company does extremely well is with its management efficiency measurements.

Why is it important that analysts are skeptical of the stock? When a stock has more hold and sell ratings than buy ratings, it means there is a greater chance for an upgrade or a series of upgrades that can help propel the stock higher.

Based on the previous rallies when the stochastic indicators made bullish crossovers, I look for Amgen to move up to the $265-$270 range in the next few months. With that in mind, I like the January 2021 $235-strike calls.