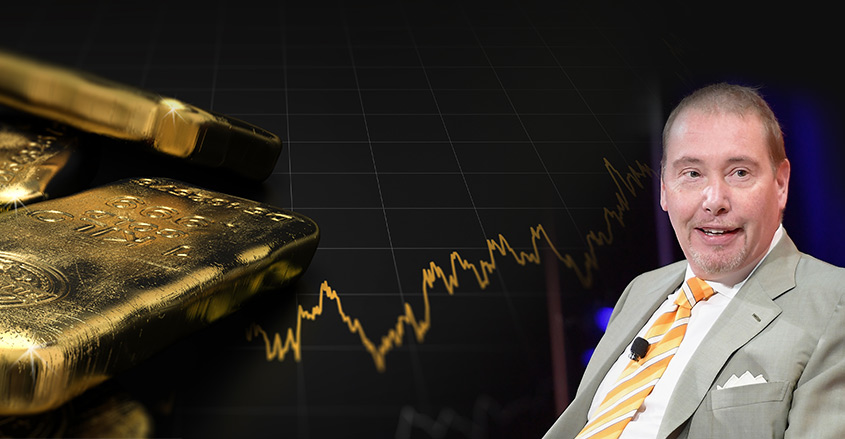 Many investors see gold as one of the safest assets that you can add to a portfolio, but is it now poised to make an epic run higher?

The bond fund manager, who runs $100 billion at DoubleLine Capital, is extra bullish on gold now. Once it breaks its resistance at $1,360 an ounce, gold will push $1,000 higher, he predicts.

“Gold is negatively correlated with the dollar. We see that gold broke above its downtrend line. But now we see a massive base building in gold. Massive,” he recently told investors at a conference.

“It’s a four-year, five-year base in gold. If we break above this resistance line one can expect gold to go up by, like, a thousand dollars.”

Timing the move is impossible, Gundlach admits, but the charts suggest that timing won’t matter to investors who are holding gold as a safety play or who are investing in options that pay if gold moves up or down, know as “straddles.”

Gold holders are likely to buy if gold falls, or enjoy the surprise returns if it shoots much higher. What gold won’t do is sit still, Gundlach believes.

“Will it happen? Well it’s not happening right now but it’s a very interesting juncture. It’s a great time to be buying gold straddles. Because one way or the other this baby’s got to break in a big way,” he says.

Recently, gold prices faded following a decrease in tensions on the Korean Peninsula. At the same time, the dollar pushed higher.

Gundlach’s claims come as the market is at the bottom range of a one-month low. June gold futures are at $1,323.10 an ounce.

While bullish on gold, Gundlach is considerably more sanguine regarding U.S. Treasuries.

The bond guru believes that 10-year yields can continue to move higher, driving down price. These comments came a day before the yields pushed passed 3% for the first time since 2014.

While this is positive for gold investors, higher bond yields could eventually impact gold. Gundlach believes that rising inflation will put increased pressure on government-issued debt.

Gold, because it is a non-yielding asset, does well in an environment where interest rates are negative, which results from when inflation is above bond yields.

At the conference he said he was “extremely bullish” on commodities because of rising inflation. Moreover, inflation tends to rise before heading into a recession, even a mild one.