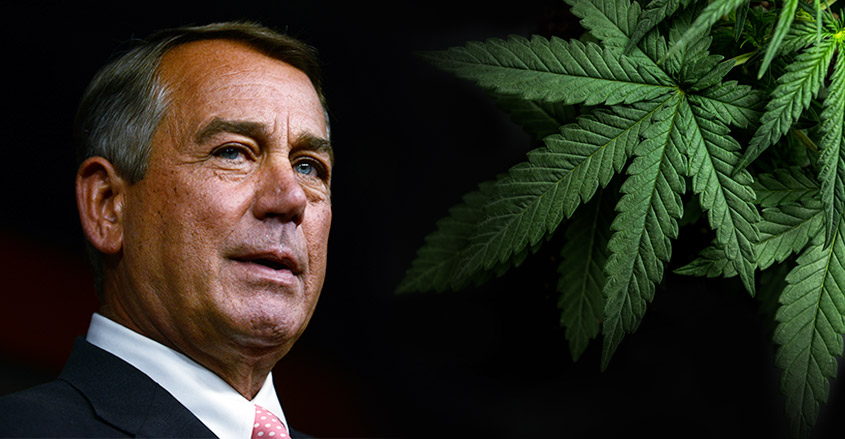 Former Speaker of the U.S. House of Representatives John Boehner and former Governor of the State of Massachusetts Bill Weld have joined the board of advisors of Acreage Holdings, one of the country’s top marijuana firms, and have committed to join the board of directors once it is formed.

Industry analysts are viewing Boehner’s decision as a watershed event that effectively announces that marijuana has finally gone mainstream and that investment in the sector could balloon in the coming years.

Nearly a decade ago, former GOP leader Boehner had said that he was “unalterably opposed” to cannabis legalization. He now says that the attitudes of Americans have undergone a sea change over the last 10 or 15 years, and that includes him as well.

Boehner said that he had a change of perspective after he saw how well marijuana worked for his close friend who was struggling with severe back pain.

According to a recent Gallup survey 64 percent of Americans want to legalize marijuana. This is a dramatic shift from 50 years ago, when only about 12 percent of the people supported legalization.

The potential use of marijuana as a treatment for veterans is another reason that has made him change his position. Furthermore, Boehner said he has spent years studying the issues facing the criminal justice system in the country, which makes him believe that legalization makes sense now.

Weld has favored medical cannabis since 1992.

In 2016, he lent his support to the referendum that led to legalization of recreational marijuana in his home state. His belief in the benefits of marijuana has strengthened, particularly in the wake of prevailing opioid crisis.

Weld says marijuana could be viewed as an exit drug instead of a gateway drug, a way to get off of harder painkillers that are far more addictive.

Announcing his decision to join the board of Acreage Holdings on Twitter, Boehner said that his thinking on cannabis has evolved. He said he is convinced de-scheduling the drug is needed to do research, help the veterans, and reverse the opioid epidemic ravaging the communities.

I’m joining the board of #AcreageHoldings because my thinking on cannabis has evolved. I’m convinced de-scheduling the drug is needed so we can do research, help our veterans, and reverse the opioid epidemic ravaging our communities. @AcreageCannabis https://t.co/f5i9KcQD0W

In a joint statement issued by Speaker Boehner and Governor Weld specifically promoted the potential for medical marijuana use by veterans.

We need to look no further than our nation’s 20 million veterans, 20 percent of whom, according to a 2017 American Legion survey, reportedly use cannabis to self-treat PTSD, chronic pain and other ailments. Yet the VA does not allow its doctors to recommend its usage. There are numerous other patient groups in America whose quality of life has been dramatically improved by the state-sanctioned use of medical cannabis.

While the Tenth Amendment has allowed much to occur at the state level, there are still many negative implications of the Federal policy to schedule cannabis as a Class 1 drug: most notably the lack of research, the ambiguity around financial services and the refusal of the VA to offer it as an alternative to the harmful opioids that are ravishing our communities.

Acreage Founder and CEO Kevin Murphy said on the appointments that the addition of Speaker Boehner and Governor Weld to the company’s board will lead to greater access for patients by changing the conversation overnight.

Boehner’s decision may not come as a surprise to some.

Boehner has long been close to tobacco lobbyists and the cigarette companies seem likely to take over the legal weed market in time.

Boehner famously disbursed campaign contributions from lobbyists from the tobacco industry in June of 1995 right on the House floor as House members were assessing how to vote on the tobacco subsidy.

Distributing lobbyist checks on the House floor was later abolished.