During the past few months, investors have had to contend with market volatility, an increase in interest rates and uncertainty about the direction of the yield curve and the stock market.

To complicate matters, those looking to take short-term profits presently face another unknown variable: May through November has historically been a six-month weak stretch for the market, with lower returns that penalizes investors who sell their shares.

Consider that over the S&P 500’s history the six-month doldrum period produced a gain of 2% versus the 5.1 % return for the strong period.

Over just the past 20 years, on average the S&P 500 has gained 0.3% during the May through October period, compared to 6.5 % between November and April, according to Wall Street Journal data.

The phenomenon has become so well-known that traders often say that investors should “sell in May and go away.”

The trend does not appear to be evenly distributed across all years, however. The sell in May, buy back in November strategy works better in some years than in others. 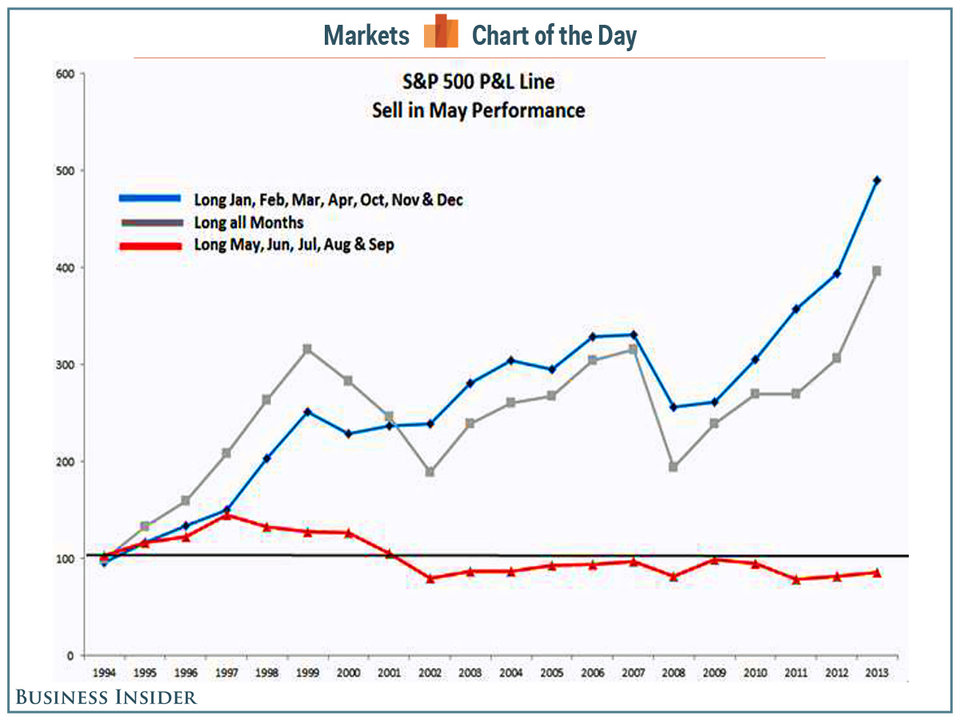 For example, over the previous five years the trend was actually reversed: The S&P 500 increased 5.6% between May and October versus 5% from April through November.

Because there are no hard-and-fast rules across all market environments, many traders do not consider the sell in May warning gospel.

Some analysts argue that if investors consistently adhere to the strategy for fear of bad luck striking, they could also miss out on potential upside opportunity — if the market doesn’t cooperate with the adage.

Some currently in the market might not want to risk betting against the lower anticipated returns that history predicts will occur starting this month, which would only feed the pattern.

Some investors, too, might be concerned about recent turbulence in the market, the end of historically low interest rates and economic data that could portend a downturn.

Given all that, the May through October period this year could result, yet again, in another bad period to hold equities.

Nevertheless, one analyst remains bullish and rejects the sell in May strategy.

“When we looked underneath the surface in a non-recession environment, we found that you’ve never had a negative market going into May and then had a negative May through September,” Dwyer told CNBC.

“It’s more likely you’re going to have an up May through September,” he said.

The reason why? Earnings. Companies are making more money, which supports higher stock prices historically. The fact that we’ve not entere a recession — yet — suggest that the historical demand for stocks will remain steady.

“Ultimately, the market moves with the direction of earnings. That is definitely going to be positive for the foreseeable future,” Dwyer said.